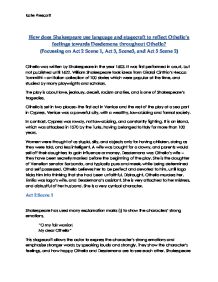 How does Shakespeare use language and stagecraft to reflect Othello's feelings towards Desdemona throughout Othello? (Focussing on Act 2 Scene 1, Act 3, Scene3, and Act 5 Scene 2) Othello was written by Shakespeare in the year 1603. It was first performed in court, but not published until 1622. William Shakespeare took ideas from Giraldi Cinthio's Hecca Tommithi - an Italian collection of 100 stories which were popular at the time, and studied by many playwrights and scholars. The play is about love, jealousy, deceit, r****m and lies, and is one of Shakespeare's tragedies. Othello is set in two places- the first act in Venice and the rest of the play at a sea port in Cypress. Venice was a powerful city, with a wealthy, law-abiding and formal society. In contrast, Cypress was rowdy, not law-abiding, and constantly fighting. It is an island, which was attacked in 1570 by the Turks, having belonged to Italy for more than 100 years. Women were thought of as stupid, silly, and objects only for having children, doing as they were told, and less intelligent. A wife was bought for a dowry, and parents would sell off their daughters to gain influence or money. Desdemona was Othello's wife - they have been secretly married before the beginning of the play. She is the daughter of Venetian senator Barbanzio, and typically pure and meek, while being determined and self possessed. Othello believes her to be perfect and devoted to him, until Iago tricks him into thinking that she had been unfaithful. Distraught, Othello murders her. Emilia was Iago's wife, and Desdemona's assistant. She is very attached to her mistress, and distrustful of her husband. She is a very cynical character. Act 2 Scene 1 Shakespeare has used many exclamation marks (!) to show the characters' strong emotions. "O my fair warrior! My dear Othello" This stagecraft allows the actor to express the character's strong emotions and emphasise stronger words by speaking loudly and strongly. ...read more.

He says: "I think my wife be honest, and I think she is not; I think thou art just, and think thou art not. I'll have some proof." He again demands proof, but admits he cannot be sure who is right and who to trust. He needs to see proof. Iago says that the only proof he could see would be to: "Grossly gape on... behold her topped" He asks if he really wants to see proof, if it would be watching Desdemona with Cassio on top of her. But Iago then gives him proof - that he heard Cassio talking in his sleep about Desdemona, and saw him use her special handkerchief - the one she had been given as a first gift from Othello and had dropped earlier - to wipe his beard with. Othello goes mad, and curses her, calling for revenge. Then, he makes Iago his lieutenant. Act 5, Scene 2 This is the "death scene" - where Othello kills Desdemona. It is the end of their relationship, and Othello has decided that she is unfaithful, and this is his revenge. In a soliloquy at the beginning of the scene, Othello says "I'll not shed her blood nor sear that whiter skin of hers than snow" He still loves her, and thinks her beautiful. He doesn't want to spoil her perfection - he still wants her to look the same, showing that he still loves her, or he may just not want her to change from the Desdemona he loved to what he could think of as Cassio's Desdemona - ruined. If she still looks the same, he could still think of her as the same as she was before, and not be tortured by memories of her ruined body. "If I quench thee, thou flaming minister, I can again thy former light restore... I cannot give it vital growth again" He says that while he can easily relight a candle - the metaphor "thou flaming minister" - he cannot restore Desdemona once he has killed her. ...read more.

At the beginning of the play, Othello and Desdemona's love is strong and emotional - they are recently wed, and still feel a passionate and strong love for each other. By scene three, Othello is beginning to doubt Desdemona's love and faithfulness, having begun to believe Iago's claims that she is unchaste and loves Cassio. In the last scene, when Othello kills Desdemona, he believes Iago, but still feels some love for his wife. He sees her death as a necessity, but also a sacrifice, showing that he no longer believes their love can continue, nor that his love was ever returned. Only after he kills her does he realise his mistake and how Iago was controlling him and his emotions, and kills himself. Strong, emotive language is used to show his feelings towards Desdemona - first of love, then confusion. His feelings were always strong, and moments of strong emotions were often shown by shortening sentences, short and sharp words, and punctuation such as exclamation marks, which showed Othello's shortness of breath and passion, and builds up tension and excitement. It also showed the actor how to emphasise certain words or emotions, and told the audience what the character was feeling. When Othello speaks to other characters in the play, he speaks in calm, measured blank verse; but when he speaks to or about Desdemona near the beginning of the play, he often uses more poetic, rhyming speech, which shows his love for her. However, when he is angry, for example in Act 5, scene 2, he switches to a rougher voice, which would often be used by Shakespeare for less educated or lower characters in plays. This shows how Iago has been affecting him - making him more the angry, possessive lover than the clear-thinking General. Throughout the play, Shakespeare uses strong, emotive language, and stagecraft such as exclamation marks and other punctuation and a variety of sentence lengths and speech styles. This helps to show Othello's feelings towards Desdemona and how they change throughout the play, from loving to possessive and angry. ?? ?? ?? ?? Kate Prescott ...read more.

This essay certainly displays elements of a 5 star essay but doesn't maintain the standard throughout. Good analysis of language, structure and form are present but at times points are repeated and expression can become a bit vague with a lack of direction.