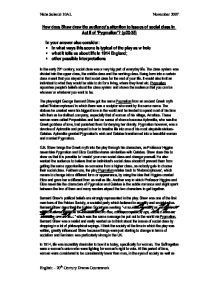 How does Shaw draw the audience's attention to issues of social class in Act II of 'Pygmalion'? (p20-35)

How does Shaw draw the audience's attention to issues of social class in Act II of 'Pygmalion'? (p20-35) In your answer also consider: * in what ways this scene is typical of the play as w hole * what it tells us about life in 1914 England; * other possible interpretations In the early 20th century, social class was a very big part of everyday life. The class system was divided into the upper class, the middle class and the working class. Being born into a certain class meant that you stayed in that social class for the rest of your life. It would also limit an individual to what they would be able to do for a living, where they lived etc. Pygmalion squashes people's beliefs about the class system and shows the audience that you can be whoever or whatever you want to be. The playwright George Bernard Shaw got the name Pygmalion from an ancient Greek myth called 'Metamorphoses' in which there was a sculptor who went by the same name. The statues he created were his biggest love in the world and he tended to spend most of his time with then as he disliked company, especially that of women of his village, Amathus. ...read more.

On the other hand Shaw also mentions that "Mr Higgins has the gentlemen's bathroom downstairs, and he has a bath every morning, in cold water". This tells the audience that the upper class are quite used to having baths and find it perfectly normal whereas the lower classes think of having a bath as a completely alien concept. In addition to the bathroom scene, Bernard Shaw also uses humour in other parts of the play, for example in the at-home scene. In this scene, Colonel Pickering and Professor Higgins decide to try out an experiment and invite Liza to Mrs Higgins at-home to see if they could pass her off as a real lady. Eliza tries to make small talk with other people from the upper class but makes a huge mistake, especially for those times, by saying the word "b****y". The other characters reaction to this word is hilarious because they are so horrified she has said something so "inappropriate" and for an audience of 1914 this one scene became something worthy of front-page news. There is also a part in this scene, in which Eliza says "Did you tell him I come in a taxi?" which implies that she believes it is a great privilege to ride in a taxi as she is from the working class and she is not accustomed to such luxuries. ...read more.

I think my response to the play was a lot different to the type of response that a 1914 audience might have had. Parts of the play which I found humorous would have been quite shocking and outrageous for an audience in 1914. For example when Eliza uses the word "b****y" I thought it was quite funny as she said it in a very elegant way even though she was swearing, but an audience of 1914 thought it shocking and this simple word made front-page headlines. I also thought that it was quite challenging for me to relate to Pygmalion and its character because of how strong the opinion on social class are. Nowadays, there is a lot more social mobility and an individual's social class isn't necessarily what they were born into but what they choose to become. Nevertheless, there are still issues about social class, and those from working classes do not receive the same opportunities as people from the upper class. Also, men and women are not entirely seen as equal beings, but social class issues have improved a great deal. I think many people do still enjoy the play and can relate to it, and the musical "My Fair Lady" has kept the spirit of Pygmalion and made it even more world-famous and renowned than it originally was. ?? ?? ?? ?? Neha Solanki 10AL November 2007 English: - 20th Century Drama Coursework ...read more.