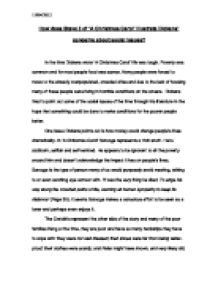 How does Stave 3 of A Christmas Carol illustrate Dickens concerns about social issues?

How does Stave 3 of 'A Christmas Carol' illustrate Dickens' concerns about social issues? In the time Dickens wrote 'A Christmas Carol' life was tough. Poverty was common and for most people food was scarce. Many people were forced to move to the already overpopulated, crowded cities and due to the lack of housing many of these people were living in horrible conditions on the streets. Dickens tried to point out some of the social issues of the time through his literature in the hope that something could be done to make conditions for the poorer people better. One issue Dickens points out is how money could change people's lives dramatically. In 'A Christmas Carol' Scrooge represents a 'rich snob'. He is stubborn, selfish and self-centred. He appears to be ignorant to all the poverty around him and doesn't acknowledge the impact it has on people's lives. Scrooge is the type of person many of us would purposely avoid meeting, talking to or even catching eye contact with. 'It was the very thing he liked. To edge his way along the crowded paths of life, warning all human sympathy to keep its distance' (Page 35). ...read more.

The Cratchit family are certainly not as rich as Scrooge but they are so much happier. They believe family and friends are so much more important than work and money. Mrs Cratchit doesn't worry about not having very much food, she worries more about her family and if anyone is late on Christmas day. ' What has ever got your precious father then, said Mrs Cratchit' Page 79. This shows how loving Mrs Cratchit and the rest of the family are to each other, and they would rather have a smaller portion of food than some of the family missing out and having more food to themselves. Scrooge has a very different view on life to the Cratchits, he believes he doesn't needs friends, family and happiness because he is rich, has a successful job and works hard. 'What right have you to be merry? What reason have you to be merry? You're poor enough. (Page 36)' Scrooge believed this until he met the Cratchit family. Scrooge is a solitary character who thinks he doesn't need support of others, however the Ghost of Christmas present shows him how companionship and friends can help make the bad situations tolerable or even enjoyable by showing Scrooge the miners, the people in the lighthouse, the sailors and the sick people in hospital. ...read more.

Another technique used by Dickens to enhance his descriptions is making long lists of adjectives. 'a squeezing, wrenching, grasping, scraping, clutching, covetous old sinner! (Page 34). It is an unusual but effective way of describing Scrooge using so many adjectives builds up a more detailed picture of Scrooge. Instead of just saying, 'Scrooge was a covetous old sinner' Dickens uses the list of adjectives before to build it up to a climax. I think a lot of the points Dickens makes in a Christmas Carol are still relevant to us today. Money can still affect our lives greatly, there is still a lot of poverty and we should learn to treat others as we would like to be treated ourselves. It is important that we don't forget all the suffering and poverty just because we don't see it everyday. Dickens was comparatively well off in the time he wrote 'A Christmas Carol' and it is likely that he had a guilty conscience about the conditions the poor people are living in. He used 'A Christmas Carol' to raise the awareness of the upper classes, as many of them were probably ignorant of the extent of the problems. We can also learn some of the lessons that the spirits taught Scrooge by being grateful for what we have that so many others don't have. ?? ?? ?? ?? 11/04/2012 ...read more.