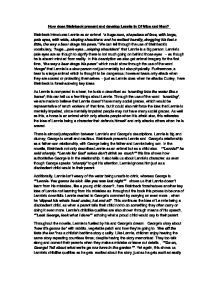 How does Steinbeck present and develop Lennie in Of Mice and Men? Steinbeck introduces Lennie as an animal 'a huge man, shapeless of face, with large, pale eyes, with wide, sloping shoulders: and he walked heavily, dragging his feet a little, the way a bear drags his paws.' We can tell through the use of Steinbeck's vocabulary, 'huge...pale eyes...sloping shoulders' that Lennie is a big person. Lennie's pale eyes are as though to signify there is not much going on behind those eyes - as though he is absent minded from reality. In this description we also get animal imagery for the first time, 'the way a bear drags his paws' which could show through the use of the word 'drags' that Lennie is a slow person not just mentally but also physically. Furthermore, a bear is a large animal which is thought to be dangerous; however bears only attack when they are scared or protecting themselves - just as Lennie does when he attacks Curley, here Steinbeck is foreshadowing key ideas. As Lennie is compared to a bear, he is also described as 'snorting into the water like a horse'; this can tell us a few things about Lennie. ...read more.

Lennie didn't understand that the mouse 'ain't fresh' which gives a sense of naivety that a child would have. As well as this, George had to explain that he wasn't 'takin' it away jus' for meanness' and had to promise to 'get another mouse that's fresh' so Lennie could 'keep it a little while'. George did this to stop Lennie 'blubberin' like a baby' and George's actions echo that of a parent who has, for example, promised to buy their child a new toy to stop them from crying. Also in this event, George 'imperiously' demands the mouse from Lennie, and this further shows how George is superior to Lennie in the relationship. 'George snapped his fingers sharply' towards Lennie, like a master would with his dog, this is shown to us in the words 'snapped his fingers sharply' as this is what owners do with their dogs to follow commands. Lennie responds to this as if he was a trained dog, this is shown in the lines 'like a terrier who doesn't want to bring a ball to its master' and also 'at the sound Lennie laid the mouse in his hand'. ...read more.

As well as this it tells us that Lennie has an aura of naivety about him as he can't distinguish who is good or bad. Additionally, this shows that Lennie perceives everyone as equals. This is shown to us when he enters Crooks' room and has unconditional trusting for him. Lennie doesn't understand why Crooks is segregated, 'I seen your light. I thought I could jus' come in an' set'', and this shows us that Lennie is absent minded from reality as previously mentioned and it furthers the idea of him being like a child as children don't understand segregation, as they too think everyone is equal. We can predict the downfall of Lennie as George tells him '"Look Lennie - if you jus' happen to get in trouble like you always done before, I want you to come right here an' hide in the brush"'. Steinbeck foreshadows that Lennie will get into trouble and will return to the place where they first started. George gave this command very obviously, and made it absolutely clear as Lennie lacks memory and needs instruction, similar to a dog being given instructions over and over again. ...read more.