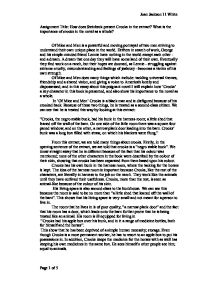 How does Steinbeck present Crooks in the extract? What is the importance of crooks in the novel as a whole? Of Mice and Men is a powerful and moving portrayal of two men striving

Assignment Title: How does Steinbeck present Crooks in the extract? What is the importance of crooks in the novel as a whole? Of Mice and Men is a powerful and moving portrayal of two men striving to understand their own unique place in the world. Drifters in search of work, George and his simple-minded friend Lennie have nothing in the world except each other - and a dream. A dream that one day they will have some land of their own. Eventually they find work on a ranch, but their hopes are doomed, as Lennie - struggling against extreme cruelty, misunderstanding and feelings of jealousy - becomes a victim of his own strength. Of Mice and Men does many things which include: tackling universal themes, friendship and a shared vision, and giving a voice to America's lonely and dispossessed; and in this essay about this poignant novel I will explain how 'Crooks' a key character in this book is presented, and also show his importance to the novel as a whole. In 'Of Mice and Men' Crooks is a black man and is disfigured because of his crooked back. Because of these two things, he is treated as a second-class citizen. We can see that he is treated this way by looking at this extract: "Crooks, the n***o stable buck, had his bunk in the harness-room; a little shed that leaned off the wall of the barn. ...read more.

He flexed his muscles against his back and shivered." As readers, we empathise with Crooks because he is not treated equally with dignity, and we know from this that Steinbeck believes in equality and fairness. The other men are not cruel to him, but he is aware of their r****m and resents it: "They play cards in there, but I can't play because I'm black." A key moment in Steinbeck novel is when Lennie goes to see Crooks. It's appropriate that when we see him in his own environment of the harness room he is defensive of his environment, telling Lennie that if he is not allowed in the white men's area, then they are not allowed in his. But unlike the rest of the ranch workers, Lennie sees no reason why he should not visit Crooks' room. Lennie's childlike mind does not recognize the idea of racial segregation, so seeing Crooks' light on, he decides to call in. We soon learn that the other men never visit Crooks. Although he grumbles at first about Lennie being there, he soon invites him to sit down and talk. For once, Crooks feels important and he talks freely to Lennie about his life on the ranch. We learn that Crooks was not "a southern n***o". When he says this to Lennie it is to show he has status, he was not a slave from the south; he was born and treated ...read more.

The three men are disturbed by the arrival of Curley's wife. She too has been left behind. She seeks out company but the men sense trouble and are unfriendly towards her. When she turns on Crooks, making thinly veiled threats and calling him a "n****r", it reminds him of his low status on the ranch. Her words bring him back down to earth and make him realize that the dream is useless: he will never be treated as an equal. The ending of Chapter Four contrasts bleakly with the earlier optimism and enthusiasm of the three men, before the arrival of Curley's wife. Perhaps the author intends the reader at this point to share Crooks' cynicism about the dream and realize that it will come to nothing. All of the characters have expectations that are sometimes called the 'Great American Dream'. This refers to the idea that people saw America as a 'land of opportunity' where ambitious people could fulfil their dreams. Throughout the novel, Steinbeck seems to be giving us 'clues' to tell us that things will go wrong and George and Lennie will never get the life they desire. The reality for people like Crooks, Candy, Lennie and George is summed up in a single line of the poem To a mouse ;from which the title of this poignant novel is taken : "The best-laid schemes o mice an men, Gang aft agley" (English: "Often go awry"). ?? ?? ?? ?? Joan Jackson 11 White Page 1 of 5 ...read more.

The student clearly knows a lot about the novel and is able to describe in great detail the events of the novel and what the characters are like. However, the essay should have had the focus on Steinbeck's character Crooks and his importance to the novel.