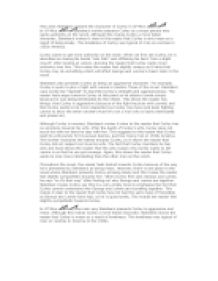 How does Steinbeck present the character of Curley in Of Mice and Men?

How does Steinbeck present the character of Curley in Of Mice and Men? In Of Mice and Men Steinbeck mainly presents Curley as a mean person who wants authority on the ranch. Although this makes Curley a more hated character, Steinbeck makes it clear to the reader that Curley is only mean as a result of being lonely. This loneliness of Curley was typical of men on ranches in 1930s America. Curley wants to get more authority on the ranch. When we first see Curley, he is described as closing his hands "into fists" and stiffening his back "into a slight crouch" after looking at Lennie, showing the reader that Curley wants more authority over him. ...read more.