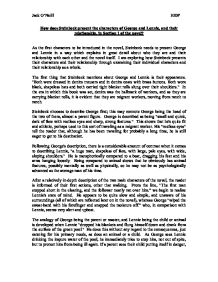 How does Steinbeck present the characters of George and Lennie, and their relationship, in Section 1 of the novel?

How does Steinbeck present the characters of George and Lennie, and their relationship, in Section 1 of the novel? As the first characters to be introduced in the novel, Steinbeck needs to present George and Lennie in a way which explains in great detail about who they are and their relationship with each other and the novel itself. I am exploring how Steinbeck presents their characters and their relationship through examining their individual characters and their relationship as a whole. The first thing that Steinbeck mentions about George and Lennie is their appearance. "Both were dressed in denim trousers and in denim coats with brass buttons. Both wore black, shapeless hats and both carried tight blanket rolls slung over their shoulders." In the era in which this book was set, denim was the hallmark of workers, and as they are carrying blanket rolls, it is evident that they are migrant workers, moving from ranch to ranch. Steinbeck chooses to describe George first; this may connote George being the head of the two of them, almost a parent figure. George is described as being "small and quick, dark of face with restless eyes and sharp, strong features." This shows that he's quite fit and athletic, perhaps used to this sort of traveling as a migrant worker. ...read more.

I said earlier that Lennie appeared to be slow and simple; this is mirrored when Lennie asked George where they were going. He is seemingly forgetful, as is shown when George answers, "So you forgot awready, did you? I gotta tell you again, do I? Jesus Christ, you're a crazy b*****d!" This is a classic example of George loosing his temper with Lennie, as he does throughout Of Mice and Men, but as always, he ends up being the one who apologizes for getting mad. While Lennie has his hands in his pockets, George notices him take something out, which is later revealed to be a dead mouse; we find out that he wanted to pet it while they walked along. This is of a very high significance with the novel as a whole, as it shows that he likes to feel things that are soft and smooth. Through George's anecdote of their the actions that took place up north in Weed, the reader learns about their motive for leaving their neighborhood; Lennie was suspected of r**e after feeling a girl's dress. He didn't mean any harm by it, but he didn't realize what he was doing, just feeling some material. ...read more.

Furthermore, the area appears as being untouched by man. This reflects greatly the bond between George and Lennie, for no matter how much other people try to meddle in with their relationship (e.g. Crooks, Curley's wife), they still remain just as they have been for the whole of their lives together. To conclude, there is a vast variety in the methods which Steinbeck used to present these characters and their relationship. He does not just give a list of adjectives, but explains to us the most important details through encouraging the reader to read between the lines. Steinbeck does this through the use of setting and plot to reflect their hidden emotions, and by the extremity of imagery to truly make the reader empathize with the characters. Section 1 is the most important section in the novel, in my opinion, as everything that comes later in the story has some significance to what we learn from the opening. The presentation of the characters and their relationship tells us so much about what is bound to happen, almost predicting what they will do and say, for we are given such a great insight to the way they work, just in the very beginning of Of Mice and Men. Jack O'Neill 10DP ...read more.

A good analysis of the presentation of these characters at the start of the novel; there could be enhanced analysis at word level allowing for full consideration of Steinbeck's language choices.
Although the title focuses on one area of the text it is still important to link findings to other sections of the novella.