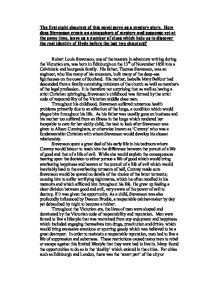 How does Stevenson create an atmosphere of mystery and suspense yet at the same time, leave us a number of clues which help us to discover the real identity of Hyde before the last two chapters?

The first eight chapters of this novel serve as a mystery story. How does Stevenson create an atmosphere of mystery and suspense yet at the same time, leave us a number of clues which help us to discover the real identity of Hyde before the last two chapters? Robert Louis Stevenson, one of the masters in adventure writing during the Victorian era, was born in Edinburgh on the 13th of November 1850 into a Calvinistic and bourgeois family. His father, Thomas Stevenson, was an engineer, who like many of his ancestors, built many of the deep-sea lighthouses on the coast of Scotland. His mother, Isabella Mary Balfour had descended from a family containing ministers of the church as well as members of the legal profession. It is therefore not surprising that as well as having a strict Christian upbringing, Stevenson's childhood was formed by the strict code of respectability of the Victorian middle class men. Throughout his childhood, Stevenson suffered numerous health problems primarily due to an affection of the lungs, a condition which would plague him throughout his life. As his father was usually gone on business and his mother too suffered from an illness in the lungs which rendered her incapable to care for her sickly child, the task to look after Stevenson was given to Alison Cunningham, or otherwise known as 'Cummy' who was a fundamentalist Christian with whom Stevenson would develop his closest relationship. Stevenson spent a great deal of his early life in his bedroom where Cummy would labour to teach him the difference between the pursuit of a life of good and that of a life of evil. While she would explain the consequences bearing upon the decision to either pursue a life of good which would bring everlasting happiness and heaven or the pursuit of a life of evil which would inevitably lead to the everlasting torments of hell, Cummy made sure Stevenson would be spared no details of the choice of the latter torments; causing him to suffer terrifying nightmares, which he often recalled in his memoirs and which afflicted him throughout his life. ...read more.

Jekyll explains that the situation with Hyde is exceptional and cannot be solved by talking. He also insists that ''the moment I choose, I can be rid of Mr. Hyde.'' But Jekyll emphasizes the great interest he currently takes in Hyde and his desire to continue to provide for him. He makes Utterson promise that he will carry out his will and testament. Approximately one year later, the scene opens on a maid sitting at her window in the early hours of the morning where she witnesses a murder take place in the street below. She perceives a small, evil-looking man, whom she recognizes as Mr. Hyde; encounter ''an aged and beautiful gentleman'' who seemed to have ''an innocent and old world kindness of disposition.''. While the gentleman offered him a greeting, it seems that his innocence and ''well founded self-content'' provoked Hyde into a state of ''ape like fury'' in which incited him into ''trampling his victim under foot and hailing down a storm of blows, under which the bones were audibly shattered''. The weapon in which Hyde had used, a walking stick of ''very tough wood'', was broken in half after being used to club the victim, thus revealing the 'beast in man' and the uncontrollable fury of Hyde. Stevenson has not spared the reader any gruesome details; describing the murder graphically as he wants us all to recognize not only that Hyde has regressed over the past year, but to also draw our attention upon the full extent of Hyde's capacity for evil. Whereas we might have previously taken Hyde for nothing more than an 'unscrupulous opportunist' who was manipulating Jekyll; the mindlessly vicious nature of the man becomes clear with the violent murder of Sir Danvers Carew. Hyde is violent at random, with no apparent motive, and with little concern for his own safety, as his willingness to beat a man to death in the middle of a public street demonstrates. ...read more.

He appears to have poisoned himself. Utterson notes that Hyde is wearing a suit that belongs to Jekyll and that is much too large for him. The men search the entire laboratory, as well as the surgeon's theater below and the other rooms in the building, but they find neither a trace of Jekyll nor a corpse. They note a large mirror and think it strange to find such an item in a scientific laboratory. Then, on Jekyll's business table, they find a large envelope addressed to Utterson that contains three items. The first is a will, much like the previous one, except that it replaces Hyde's name with Utterson's. The second is a note to Utterson, with the present day's date on it. Based on this piece of evidence, Utterson surmises that Jekyll is still alive and he wonders if Hyde really died by suicide or if Jekyll killed him. This note instructs Utterson to go home immediately and read the letter that Lanyon gave him earlier. The note adds that if he desires to learn more, Utterson can read the confession of "Your worthy and unhappy friend, Henry Jekyll." Utterson takes the third item from the envelope, a sealed packet, and promises Poole that he will return that night and send for the police. He then heads back to his office to read Lanyon's letter and the contents of the sealed packet. It is impossible for the modern reader to read this novel as an unsuspecting Victorian would have done, because today, Jekyll's double identity is so well known. It is however, easy to see that Stevenson intended to keep his readers in mystery and suspense for as long as possible, while challenging them to discover the truth for themselves, by leaving a series of vital clues. The reader only begins to realize the full truth when our guide Utterson has been dispensed with. Up to this point, he has been not only as an narrator but as a means of deepening the mystery and therefore heightening the tension and suspense. ...read more.