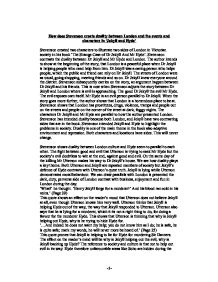 How does Stevenson create duality between London and the events and characters in 'Jekyll and Hyde' Stevenson created two characters to illustrate two sides of London in Victorian society in his book 'The Strange Case of Dr Jekyll And Mr Hyde'. Stevenson contrasts the duality between Dr Jekyll and Mr Hyde and London. The author intends to show at the beginning of the story, that London is a peaceful place when Dr Jekyll is helping people who need help from him. Dr Jekyll was a caring person who helps people, which the public and friend can rely on Dr Jekyll. The streets of London were as usual, going shopping, meeting friends and so on. Dr Jekyll knew everyone around the district. Stevenson subsequently carries on the story, an argument happen between Dr Jekyll and his friends. This is now when Stevenson adjusts the story between Dr Jekyll and London where is evil is approaching. The good Dr Jekyll the evil Mr Hyde. The evil exposes own itself. Mr Hyde is an evil person parallel to Dr Jekyll. When the story goes more further, the author shows that London is a horrendous place to be at. Stevenson shows that London has prostitutes, drugs, violence, tramps and people out on the streets and people on the corner of the street at dark, foggy nights. ...read more.

When Stevenson introduces Hyde, the author shows that London day life during the night is an outrageous place to be, at that time of night. Prostitution will occur, violence will occur and other criminal offence will occur at Soho. So the reader mind will effect that the author is showing that the two sides of London between the balance of good and evil. The good things happen during the day when Jekyll is around. The bad things occur during the night when Hyde is around. The society and culture is that the streets during the night are very unpleasant place to be at. The tension between order and disorder is that Utterson is ordered and Jekyll pretends to be ordered. The lab is where order and disorder meet. London also embodies this contrast. Utterson offers Poole a glass of wine to calm him, Poole is terribly afraid he mutters about foul play once at Dr Jekyll house, he finds his servants all huddled. The two men go to the cabinet door and they hear a strange voice inside. Poole tells of notes thrown on the stairs asking for a pure drug. Poole admits that he has seen the strange creature 'move a dwarf'. 'Changed? Well, yes, I think so,' said the buttler. ...read more.

'At the horror of theses sights and sights and sounds, the maid fainted.' (Page 30) The effect on the reader's mood will be that Victorian society should call the police when dark side is taking effect, not viewing the event of the murder of Sir Danvers. Lanyon dies of shock when watching Jekyll transforming into Hyde. Lanyon couldn't bare to watch the darkness evolving from Jekyll and then dies of shock. Lanyon ends his letter by explaining how sickened he was and how he had to wrote the letter. This bought his death. 'I feel that my days are numbered, and that I must die; ...' (Page 68) This quote proves that Lanyon could not bare the situation that Jekyll is Hyde and Hyde is Jekyll. He was sickened that when he saw Jekyll transforming and he then realised he was Hyde an all. This ends in a conclusion, Stevenson creates duality between London and the events and characters in Jekyll and Hyde between good and evil. Stevenson showed two characters Jekyll and Hyde to describe London in the way the society runs. London is played by two characters that runs by good and evil during the day or night. Although during the day everything is hidden no one can notice what is going on. While at the night allsorts are going on in the Victorian society. Stevenson used these two characters, for the events and atmosphere to represent the dual nature of society. -1- ...read more.