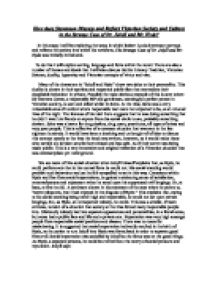 How does Stevenson Discuss and Reflect Victorian Society and Culture in the Strange Case of Dr. Jekyll and Mr. Hyde?

How does Stevenson Discuss and Reflect Victorian Society and Culture in the Strange Case of Dr. Jekyll and Mr. Hyde? In this essay I will be exploring the ways in which Robert Louis Stevenson portrays and reflects the society into which his novelette, The Strange Case of Dr. Jekyll and Mr. Hyde was initially introduced. To do this I will explore setting, language and form within the novel. There are also a number of themes and ideals that I will also discuss Gothic Literary Tradition, Victorian Science, duality, hypocrisy and Victorian concepts of virtue and vice. Many of the characters in "Jekyll and Hyde" show two sides to their personality. This duality is shown in their spotless and respected public face that contradicts their despicable behaviour in private. Possibly the most obvious example of this is seen where Sir Danvers Carew, a respectable MP and gentleman, seemingly a perfect person in Victorian society, is seen and killed whilst in Soho. At the time, Soho was a very undesirable area of London where respectable men were not expected to be, at an unusual time of the night. The lateness of his visit there suggests that he was doing something that he didn't want his friends or anyone from his social circle to see, probably something deviant. Soho was a haven for drug dealers, drug users, prostitutes, all types of crime and very poor people. ...read more.

This may be because he is secretly acting upon the evil longings that he must suppress for most of the time, due the social expectations of a man in his position Another way that Stevenson explores Victorian society is through its science. At the time of the publication of the book, one new scientific theory was the Darwinian theory of evolution. This is explored in the book. Many Victorians believed that criminals were less evolved than normal people; they were thought to be a throwback from humanity's primitive past. Hyde, the criminal, is often described as being similar to an animal and less evolved. Specifically, he is described as being "ape-like" in his fury. Mr. Utterson says, "The man seems hardly human! Something troglodytic." This implies he is primitive and less evolved. When Poole and Utterson are breaking into Jekyll's cabinet Hyde emits, "A dismal screech, as of mere animal terror." Again, animal-like traits are highlighted. Gothic Literary Traditions from the time period of the publication of the book are also important when we are discussing its storyline and themes. They were traditions that were commonplace in novels of the time. There were set rules and patterns. There is the idea of the gothic "monster" which was very common at the time, which takes the form of Hyde in this case. There was also the typical atmosphere of darkness and secrecy and unnatural forces at work. ...read more.

The reader would recognize much reality in the book. They would see truths from the time. For example, the pressures of society would be familiar. Some may be shocked or slightly uncomfortable when reading it, because the ideas of living double lives and suppressing evil and acting upon it in privacy, would have rung true of some readers. To discuss this in the open would have been out of the question and may have put certain individuals in an extremely uncomfortable spotlight. As was discussed earlier in the essay there was a clear Victorian mentality that reputation was very important, possibly the most important thing to some individuals. So some may have had private feelings and longings and may have acted upon these in private. On seeing this in the book, Sir Danvers Carew's situation for example, it may have felt to them as though they were no longer safe to have a sinful private life as people new that this sort of thing happened. * * * In conclusion I think that the book is a fairly truthful reflection of many aspects of Victorian society and culture, especially the idea of living a double life. I also think that Stevenson's use of Gothic Literary tradition is effective. In the novelette, he provides a new variation on traditional themes. All in all, I think that Stevenson employs a high level of reality and supplements this by drawing from the literary culture of the Victorian Britain of which he was a part. To do Quote for page 3 paragraph 2 ! Quote for page 4 para 2 !! ...read more.