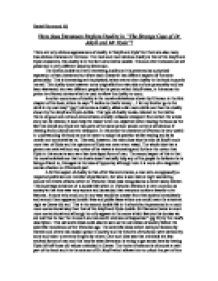 How does Stevenson Explore Duality in The Strange Case of Dr Jekyll and Mr Hyde?

Daniel Hammond 5Q How does Stevenson Explore Duality in "The Strange Case of Dr Jekyll and Mr Hyde"? There are very obvious appearances of duality in 'Jekyll and Hyde' but there are also many less obvious instances in the book. The main and most obvious duality is that of the Jekyll and Hyde characters, this duality is in the form of a Gothic double. This and other instances are all presented in very different ways by Stevenson. The Gothic double is a very interesting duality as it is presented as a physical separation of two characters but where each character has different aspects of the same personality. This is interesting as it is physical, where every other duality in the book is purely mental. This duality does however come originally from two sides of one personality and has been abstracted into two different people by the potion which Jekyll takes, in this sense the potion is a literary device which is used to allow the duality to occur. Another occurrence of duality is the moral ambivalence shown by Utterson in the first chapter of the book, where he says "I incline to Cain's heresy ... I let my brother go to the devil in my own way" (pg 1) of course a duality, albeit a far more subtle one than the duality shown by the Jekyll and Hyde double. ...read more.

This element of hypocrisy is repeated several times within the book and it could in fact be said that moral ambivalence is a form of hypocrisy as it deals with the unwillingness to commit to one side or the other. Moral ambivalence however is more complex than this as it is an avoidance of commitment rather than a reversal of polarity in commitment. In the case of the Gothic double duality with the characters of Jekyll and Hyde, there is a well made ambiguity in the appearances of the two characters this is done by spacing the occurrences of Hyde out down the book so that the reader gets the impression of two entirely separate people. Stevenson then brings the two together to form a more concrete duality rather than the simple contrast of the two separate characters. This in turn makes the duality all the more shocking in the end when it is revealed. Another aspect to this shock element is that in the time when the book was written it would have been even more shocking to its readers as there was nothing like this in literature of or before that period. The duality is also a contrast, it deals with one major theme within Gothic literature, the theme of good and evil. In this case Jekyll of course represents good and Hyde evil. This first inkling any character in the book or any reader has of this transformation, the double of Jekyll and Hyde, is in the ...read more.

Stevenson uses other literary devices as well, for example the potion is a physical item but it represents and idea that something can cause a split of personality like the one which occurs in Jekyll's case, it may also be seen to represent the theory of evolution which had just been announced at the time and was creating controversy in the scientific and religious world. The idea that a catalyst could change man into a monster would have seemed very intriguing at the time. The other aspects of duality are also explained clearly, the ideas of good and evil are presented through Utterson's moral ambivalence and through the staunch sense of right and wrong possessed by Dr Lanyon who features only minimally. All in all the aspects of duality are stressed very strongly throughout the book and the ideas themselves are presented well to the reader. The science overtones are very obvious throughout the book and are used very well to create a sense of mystery and horror as science was always a part of Gothic literature. It could also be said that Stevenson is exploring aspects of society, in particular the austerity of Victorian society, when he alludes to the double life of Sir Danvers Carew and the ideals of Victorian society. In conclusion the way Stevenson presents duality in "The Strange Case of Dr Jekyll & Mr Hyde" is varied and complex and deals with the themes of morality and human nature, in particular perhaps that there may be a bit of Jekyll and Hyde in all of us. ...read more.