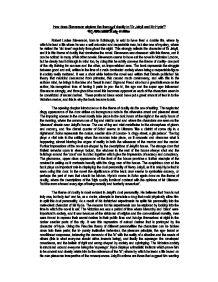 How does Stevenson explore the theme of duality in Dr Jekyll and Mr Hyde?

How does Stevenson explore the theme of duality in 'Dr Jekyll and Mr Hyde'? By Alasdair Lindsay-Walters Robert Louise Stevenson, born in Edinburgh, is said to have lived a double life, where by which he lead a life where he was a well educated and respectable man, but also one of mystery, where he visited the 'old town' regularly throughout the night. This strongly reflects the character of Dr Jekyll, and it is this theme of duality that dominates the novel. Stevenson was obsessed with this theme, and it can be noticed in many of his other novels. Stevenson seems to have set the novel in Victorian London, but he clearly has Edinburgh in mind too, by doing this he subtly conveys the theme of duality- one part of the city thriving for success and the other, an impoverished area. The book represents the struggle between good and evil, written in the time of a male dominated society where being a respectable figure in society really mattered. It was a short while before the novel was written that Darwin published his theory that mankind descended from primates, this caused much controversy, and with this in the authors mind, he brings in the idea of a 'beast in man'. ...read more.

The glamorous, upper class appearance of the front of the house provides a further example of the contrast in setting as it contrasts heavily with the dingy rear of the house. The suspicious door at the back plays an important role in displaying the dual personality of Henry Jekyll, as it is only Hyde that is seen using this door. In the novel the significance of the back door seems to symbolise secrecy, or perhaps the part of man that should be hidden. Hyde's rooms in Soho again draw on the theme of duality, where the descriptions of the 'high quality furniture' contrast with the opinions of Mr Utterson: 'but the room showed every sign of being recently and hurriedly ransacked'. The theme of duality is most evident in Jekyll's dual personality. He believes that 'man is not truly one, but truly two' and he, as a doctor, attempts to formulate a drug that could physically allow him to split this dual personality. As a result of his farfetched experiments he splits his personality into the malevolent character of Mr Hyde. The reasons for his experiments can be explored by looking into the time in which the novel is set. ...read more.

Hyde clearly represents 'the beast in man' and is described in a number of animalistic images; 'sneering coolness like satan'. His speech is different from other characters. He lacks their verbosity, having no time for social discussion, and when Utterson first confronts him he is described as 'hissing' like a cornered snake. He speaks to Utterson with a short, blunt tone to his speech, staccato sentences which are in the form of unnervingly direct questions: 'how did you know me?'; 'what shall it be?'; 'whose description?'; who are they?'. Finally when he leaves this conversation which had been forced upon him, he bluntly accuses Utterson of having 'lied'. When Utterson complains that this is not fitting language, Hyde 'snarled aloud in a savage laugh' before disappearing into the house. It is not surprising that the lawyer is left with 'a picture of disquietude' after this whirlwind encounter. Enfield's impression of Hyde reveals further contradictions. He is 'cool' yet underneath 'frightened', and although there is nothing particularly displeasing about him physically, he provokes an intense feeling of hatred and evil within all around him. Hyde's appearance is enigmatic, which mysteriously seems to change as he becomes the more dominant demeanour of Jekyll. ...read more.