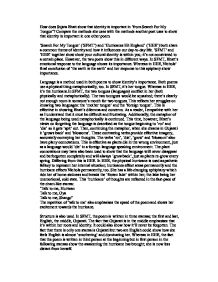 How does Sujata Bhatt show that identity is important in 'from Search For My Tongue'? Compare the methods she uses with the methods another poet uses to show that identity is important in one other poem. 'Search For My Tongue' ('SFMT') and 'Hurricanes Hit England' ('HHE') both share a common theme of identity and how it influences our day-to-day life. 'SFMT' and 'HHE' together show show your cultural identity is within you; it's not constricted to a certain place. However, the two poets show this in different ways. In SFMT, Bhatt's emotional response to the language shows its importance. Whereas in HHE, Nichols' final conclusion of 'the earth is the earth' and her response to this epiphany show importance. ...read more.

Then, continuing the metaphor, when she dreams in Gujarati it 'grows back' and 'blossoms'. These contrasting verbs provide effective imagery, accurately conveying her thoughts. The verbs 'rot', 'die', 'grow' and 'blossom' also have plany connotations. This is effective as plants die in the wrong environment, just as a language would 'die' in a foreign language speaking environment. The plant connotations may have also been used to show that the language will never disappear and be forgotten completely and will always 'grow back', just as plants re-grow every spring. Differing from this is HHE. In HHE, the physical hurricane is used as pathetic fallacy to represent her internal situation; hurricanes effect areas permanently and the hurricane effects Nichols permanently, too. ...read more.

The fact that there is only one stanza is Gujarati but two are English could show how she feels English is almost 'smothering' and dominating her. Whereas in HHE, the fact that the poem is written in third person at the beginning but in first person in the following stanzas show the awakening the hurricane has brought; she is now less distant from herself. In conclusion, both poems effectively show identity's importance. SFMT shows the emotional connection she has with her mother tongue as it makes her feel closer to her culture. Whereas, HHE shows how the hurricane brings her closer to her Caribbean roots. Both poems show how feeling disconnected from your roots can affect your life. This made me emphasise with both poets and feel embarrassed at my lack of awareness of how immigrants struggle in a foreign country. ...read more.

The response here is for a question on the importance of identity and the means by which Sujata Bhatt and one other poet display this importance. The candidate has opted to compare the prescribed 'Search For My Tongue' with 'Hurricane ...

The response here is for a question on the importance of identity and the means by which Sujata Bhatt and one other poet display this importance. The candidate has opted to compare the prescribed 'Search For My Tongue' with 'Hurricane Hits England' by Moniza Alvi; an apt choice, as both lend themselves well to the theme of struggling to find an identity after being displaced from the poets' homeland. The focus is extremely good and there is an excellent range of poetic devices commented on and how these show the importance of both identities (homeland and their new home) that are providing the struggle for these poets. The focus is thoroughly consistent, and with a diverse understanding of both poems, this answer provides excellent insight with regard to the question.

The Level of Analysis is entirely indicative of someone who is operating at a strong A grade. With only a few extra marks to be made before the candidate reaches the A* grade boundary, the vehicle to get them there would be to ensure and profound level of contextual appreciation is integrated within the analysis. It becomes tiresome seeing context just lumped towards the beginning of an answer as if a separate answer for a separate question, and this candidate has done well to try and integrate somewhat, though there is limited evidence of independent external research because the contextual evidence shown is not of a sufficient level of depth.
Where the candidate succeeds is almost everywhere else. The level of detail taken to analyse language is excellent. Quoting whole chunks of texts from book/poems it not the way to score highly in analytical tasks and is often time consuming, thus this candidate has done very well to hone in on words like "rot" and "die" to show a very specific eye for analytical detail. This is good to see as it is of both practical and academic benefit by taking less time to quotes and showing the examiner that the candidate can choose singular words or phrases and say a lot about a little.

The Quality of Written Communication is also very high. Their is evidence of a great understanding of a number of complex punctuation points, and the standard rules of grammar appear abided by at all times. There is a range of challenging, field-specific lexis that is spelled correctly and the answer is kept interesting by a range of syntactic sentence lengths.