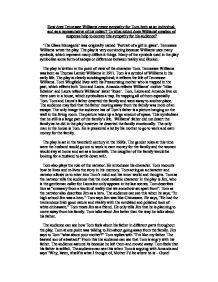 How does Tennessee Williams create sympathy for Tom, both as an individual, and as a representative of his milieu? To what extent does Williams' creation of suspense help to convey this sympathy for his audience?

How does Tennessee Williams create sympathy for Tom, both as an individual, and as a representative of his milieu? To what extent does Williams' creation of suspense help to convey this sympathy for his audience? 'The Glass Menagerie' was originally named 'Portrait of a girl in glass'. Tennessee Williams wrote the play. The play is very convincing because Williams uses many symbols, which represent many different things. Many of the symbols used in the play symbolize some form of escape or difference between reality and illusion. The play is written in the point of view of the character Tom. Tennessee Williams was born as Thomas Lamier Williams in 1911. Tom is a symbol of Williams in his early life. The play is clearly autobiographical; it reflects the life of Tennessee Williams. Tom Wingfield lives with his Pressurising mother who is trapped in the past, which effects both Tom and Laura. Amanda reflects Williams' mother 'Miss Edwina' and Laura reflects Williams' sister 'Rose'. Tom, Laura and Amanda live on there own in a house, which symbolises a trap. Its trapping all of them especially Tom. Tom and Laura's father deserted the family and went away to another place. The audience may feel that the father moving away from the family was more of an escape. The only image the audience has of Tom's father is a picture hanging on the wall in the living room. The picture takes up a large amount of space. This symbolises that he still is a large part of the family's life. Williams' father did not desert the family as he did in the play however he deserted the family emotionally. ...read more.

Amanda tells Tom that he spends too much time at the movies. This is in scene four when Amanda says, "But, Tom, you go to the movies entirely too much!" Tom finds adventure in the movies and not much adventure at work. That's why he goes there most nights. The audience can see this when Tom says to Amanda, "I go to the movies because - I like adventure. Adventure is something I don't have much of at work, so I go to the movies." The audience know that Tom doesn't spend all his time at the movies because he usually comes home drunk after an argument with Amanda. The audience know that Tom is drunk because at the beginning of the scene Williams writes, "This and the unsteadiness of his advance make it evident that he has been drinking." People usually drink when they are depressed or feel bad about something. In Tom's case he is drinking alcohol because he feels trapped and drinking would be like a temporary exit to his problems. Tom also Smokes. Tom smokes and smoking is a sign of weakness. The audience know that Tom smokes right at the beginning of the play because he says in scene one, "I'm getting a cigarette." Tom's job in the warehouse is also trapping him. He doesn't like his Job and he feels that it is not adventurous. The audience can see this when Tom says, "Man is by instinct a lover, a hunter, a fighter, and none of those instincts are given much play at the warehouse" Tom is simply trying to say that he doesn't get a mans natural instincts from working at the warehouse. The audience can feel a sense of Tom's jealousy at one stage of the play. ...read more.

Tom's father is a symbol of sympathy. Even though it may seem to the audience that he helped Tom in a way to escape, him leaving the family built up a lot of sympathy for Tom as an individual. Williams uses the father a symbol of compassion. Williams not only used symbols of understanding but he built up points of tension in the plot, which created suspense, which had an effect on the evocation of sympathy for Tom. The biggest creation of suspense was when the audience started to feel that Tom was selfish because he didn't pay off the light bill however Tom's reasons understood by the audience. Williams use of lighting helps to create suspense. Tom says, "I'll rise - but I won't shine." The light increases after that. Williams' use of language helps to understand the way that Tom feels and creates tension between Tom and the characters in the play. When Tom is arguing with Amanda he often uses a lot of Exclamation marks. This could suggest that Tom Bluntly means what he says. Williams also uses different grammar techniques, which show how Tom and Amanda are constantly interrupting each other. An example of this is shown when Amanda and Tom are arguing in scene three and Tom says, "What in Christ's name am I -" Tom is then interrupted by Amanda. Williams's use of captions builds up tension in the play. Overall Tom has a very big effect on Amanda and Laura. Williams used other characters in the play to create a lot of understanding and compassion for Tom. Tom moves away from the Wingfield household. The audience do not feel angry with Tom or feel that he is selfish for deserting the family like his father because of the sympathy Williams built up for him throughout the play. ...read more.