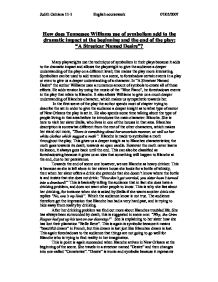 How does Tennessee Williams use of symbolism add to the dramatic impact at the beginning and the end of the play;

How does Tennessee Williams use of symbolism add to the dramatic impact at the beginning and the end of the play; "A Streetcar Named Desire"? Many playwrights use the technique of symbolism in their plays because it adds to the dramatic impact and allows the playwright to give the audience a deeper understanding of the play on a different level; this makes the play more interesting. Symbolism can be used to add tension to a scene, to foreshadow certain events in a play or even to give us a deeper understanding of a character. In "A Streetcar Named Desire" the author Williams uses a numerous amount of symbols to create all of these effects. He adds tension by using the music of the "Blue Piano", he foreshadows events in the play that relate to Blanche. It also allows Williams to give us a much deeper understanding of Blanches character, which makes us sympathetic towards her. In the first scene of the play the author spends most of chapter trying to describe the set in order to give the audience a deeper insight as to what type of sector of New Orleans the play is set in. He also spends some time talking about the type of people living in that area before he introduces the main character: Blanche. ...read more.

The streetcar is not getting anywhere, it is just going up and down in the quarter, and this is exactly like her dream, it is not getting anywhere. In scene four: "up one narrow street and down another". The streetcar however is also used as a euphemism for s****l experience. This can be seen in scene four when Blanche is arguing with Stella following the event of the Poker night, she is shocked how Stella can still stay with Stanley after what he has done to her: "What you are talking about is brutal desire-the name of the streetcar!" She thinks that Stella's relationship with Stanley is purely physical and that there is no love involved, which is true. The area of New Orleans in which Blanche has come to stay is called "Elysian fields". This is the place where Greek heroes go after death this is why it is viewed as heaven. However this is ironic because Blanche has come here to find heaven, but the audience can tell that she is certainly not going to achieve this. Therefore Williams has again used symbolism to foreshadow events to the audience. However our views of Blanche are changed as we progress through the play. ...read more.

Another reason why Williams has used a paper lantern in this play is because it represents Blanche. She makes things look pretty, however they are very simple. Paper lanterns are also very fragile, and can easily be broken. We see this in scene eleven when Blanche is about to breakdown completely; Stanley tears the lantern off the light bulb. Blanche responds by "she cries out as if the lantern was herself" This shows the audience that what has just happened to the paper lantern will also happen to Blanche very soon. Williams has used symbolism throughout "A Streetcar named desire". He added tension and foreshadowed a numerous amount of events. He even used symbolism to create sympathy for Blanche by passing on information to the audience, which only the audience knew about- not other character in the play was aware of the facts. By using symbolism Williams also added historical facts to the play and even made comparisons between events from his life and the play. However I have come to the conclusion that the best use of symbolism to add to the dramatic impact was to foreshadow. This made the audience more aware not only about what was going to happen but also gave them a deeper insight into the present situation of the play. Judith Ochiana 11-1 English coursework 07/05/2007 ...read more.