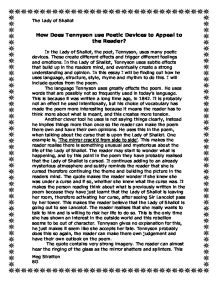 How Does Tennyson use Poetic Devices to Appeal to the Reader?

How Does Tennyson use Poetic Devices to Appeal to the Reader? In the Lady of Shallot, the poet, Tennyson, uses many poetic devices. These create different effects and trigger different feelings and emotions. In the Lady of Shallot, Tennyson uses subtle effects that build up in the readers mind, and eventually create a strong understanding and opinion. In this essay I will be finding out how he uses language, structure, style, rhyme and rhythm to do this. I will include quotes from the poem. The language Tennyson uses greatly effects the poem. He uses words that are possibly not so frequently used in today's language. This is because it was written a long time ago, in 1842. It is probably not an effect he used intentionally, but his choice of vocabulary has made the poem more interesting because it means the reader has to think more about what is meant, and this creates more tension. Another clever tool he uses is not saying things clearly, instead he implies things more than once so the reader can make the poem there own and have their own opinions. He uses this in the poem, when talking about the curse that is upon the Lady of Shallot. ...read more.

However Tennyson could also be talking about the reader because, as I have already mentioned, the quote makes the reader feel like they can actually hear the song, Tennyson could have picked up on this and used the word 'heard'. The reader might think Tennyson was talking about another character, possibly Lancelot, because Tennyson has not really interacted with or talked about the reader anywhere else in the poem. Another quote from the poem is 'Four grey walls and four grey towers, Overlook a space of flowers'. The main thing the reader thinks of is that the Lady of Shallot is unhappy in her tower. The reader thinks this for many reasons, one being that word grey is often associated with boring or dull. This means the reader assumes the place in which the Lady of Shallot lives is boring. The boring theme is continued by using the phrase 'four walls', because it sound quite regular and not daring or interesting. The second part of the quote, 'Overlook a space of flowers' makes her room sound dreary because if you compare the grey room or an outside space with flowers, then the outside space sounds much more appealing. ...read more.

The Lady of Shallot has quite an individual style. It is like a story but yet it is a poem. It has chapter like sections that follow the journey of one woman. It was written in 1842 so it is quite old fashioned, not only the language, but also the general opinions of people of the time are portrayed in the poem. What I mean by this is because it was written in Victorian times; it reflects some of the common views from those times. For example some parts of it could be thought of as s****t. The points are * The Lady of Shallot was expected to stay in the tower, which is similar to the expectation that a woman should stay at home. * She was expected to sew a web, similar to the expectation that women should be housewives. * She was the one that died for a man, maybe a subtle way of showing that a man is better and more important that a woman. I think Tennyson uses poetic devices well in the poem, the Lady of Shallot. He uses them to imply many things and from analysing different quotes I have realised he uses many more subtle ones than first recognisable Targets: Use key vocabulary Try to explore how text informed by time and place. ?? ?? ?? ?? The Lady of Shallot Meg Stratton 8G ...read more.