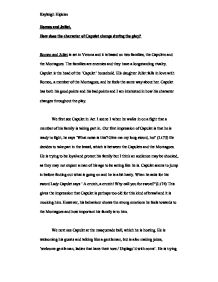 How does the character of Capulet change during the play?

Romeo and Juliet. How does the character of Capulet change during the play? Romeo and Juliet is set in Verona and it is based on two families, the Capulets and the Montagues. The families are enemies and they have a longstanding rivalry. Capulet is the head of the 'Capulet' household. His daughter Juliet falls in love with Romeo, a member of the Montagues, and he feels the same way about her. Capulet has both his good points and his bad points and I am interested in how his character changes throughout the play. We first see Capulet in Act 1 scene 1 when he walks in on a fight that a member of his family is taking part in. Our first impression of Capulet is that he is ready to fight, he says 'What noise is this? Give me my long sword, ho!' (I.i.73) He decides to take part in the brawl, which is between the Capulets and the Montagues. He is trying to be loyal and protect his family but I think an audience may be shocked, as they may not expect a man of his age to be acting like he is. ...read more.

Capulet is a proud man and behaves calmly considering the situation, which gives us a good impression of him. Act 3 scene 5 begins with Juliet and Romeo in Juliet's bedroom. This is a gentle and calm environment. Capulet plays an important part in this scene because he discovers Juliet does not want to marry Paris. When he enters the scene Capulet's language is poetic and calm 'For still thy eyes, which I may call the sea,/Do ebb and flow with tears.' When Capulet finds out that Juliet does not want to marry Paris his language changes and he becomes more annoyed. 'How? Will she none? Doth she not give us thanks? Is she not proud? Doth she not count her blest, Unworthy as she is, that we have wrought So worthy a gentleman to be her bride?' He thinks she is being disobedient towards him because he has found such a worthy gentleman. His language becomes more aggressive and he is angry. Capulet is telling Juliet that she has to marry Paris and is being quite offensive to her. ...read more.

Capulet's last words in the play are ' Poor sacrifices of our enmity', he is realising the consequences of their feud. It seems a shame for Capulet that it takes such a terrible thing like his daughter dying to make him realise how important family is and, how selfish he has been. Capulet is an interesting character to the audience for many reasons. Capulet is interesting because of the way he develops, he is complicated and hard to understand but goes from being selfish to being compassionate. Audiences may react to Capulet differently at different times. The people in the time of Capulet may go along with his way of thinking and they may be horrified at Juliet's refusal to marry Paris. At the time Shakespeare was writing, the father was the head of the household. A modern audience may find Capulet's attitude old-fashioned and they may be surprised at the lack of respect he has for his daughter. We may see where he is coming from, but it is just the way he is acting which is hard to agree with. Capulet has good qualities and bad qualities and it is this, which makes him an interesting character. ?? ?? ?? ?? Kayleigh Hipkiss ...read more.