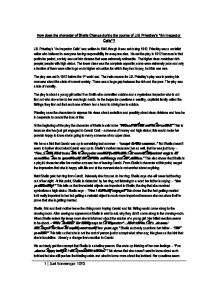 How does the character of Sheila Change during the course of J.B. Preistely's &quot;Inspector Calls&quot;

How does the character of Sheila Change during the course of J.B. Priestley's "An Inspector Calls"? J.B. Priestley's "An Inspector Calls" was written in 1945 though it was set during 1912. Priestley was a socialist writer who believed in everyone having responsibility for everyone else. He set the play in 1912 because in that particular period, society was set into classes that were extremely noticeable. The higher class contained rich people; people with high status. The lower class was the complete opposite; some were extremely poor and only a fraction of them were able to go on to higher education for which they had to pay, but this was rare. The play was set in 1912 before the 1st world war. The main reason for J.B. Priestley's play was to portray his concerns about the state of current society. There was a huge gap between the rich and the poor. The play was a tale of morality. The play is about a young girl called Eva Smith who committed suicide and a mysterious inspector who is out find out who drove her to her own tragic death. As the inspector questions a wealthy, capitalist family called the Birlings they find out that each one of them had a hand in driving her to suicide. Priestley uses the characters to express his views about socialism and possibly about class divisions and how he is desperate to cancel the idea of this. At the beginning of the play the character of Sheila is said to be "Pleased with life and rather excited." This is because she has just got engaged to Gerald Croft - someone of money and high status; this would make her parents happy to know she is going to marry someone of an upper class. We have a hint that Gerald was up to something last summer - "except for last summer..." ...read more.

As Sheila is staring at the inspector, Sheila says - "I don't understand about you." - This shows that she is quite inquisitive; she doesn't have full trust in the inspector. Gerald explains to everyone about how he came across to know Eva Smith. Gerald says that he picked her up from a bar after he saw that she was been harassed by this man, he felt pity for her so that is why he picked her home. Then he found out that she didn't have a home after they had dinner together, so he decided to let her stay in his friend's house. Over the summer they became close but he was also busy with work. Finally it was the first week of September and he had to go away for a business trip for several weeks and so Eva Smith knew it was going to and end; so Gerald broke up with her definitely and after she says she was going to move to Brumley he never saw her again. Sheila listened carefully and calmly to the story been sarcastic in-between; after Gerald had told his story he wanted to go for a walk and then that was when Sheila gave him the engagement ring back to him as she as decided to end the relationship Gerald. This is ironic because before everything the started happening Sheila says - "I'll never let it (ring) out of my sight." This makes us realize that Sheila as changed from what she was like in the beginning; she also realise this herself - "We are not the same people who sat down to dinner here..." this tells us that she knows that she has changed from the girl that only cared about herself to a girl that is more aware of her actions and now cares about people around her. After ending the relationship and giving back the ring to Gerald we realise that Gerald is pretty fair to Gerald. ...read more.

She is also a changed woman - "You and I aren't the same people who sat down to dinner here" - this also shows that she know as well that she is a changed woman. She is also very perceptive and inquisitive she is knows what her mother had done before her mother admitted and she is very inquisitive saying to the inspector - "I don't understand about you." Sheila now also listens to her conscience knowing when Eva was said not to be true she had no death on her conscience but she still felt that the story was really and that there was an Eva Smith. She is an honest deep thinker who thinks about the consequences of her actions on the day of Milward and how that led on to other unfortunate events. Sheila is not anymore as heartless as the others but she is sensitive she doesn't listen to the rest of her family when they say that the inspector was hoax and when they said that there was no suicide - "You're pretending like everything's just as it was before." The rest of Sheila's family act like the inspector coming was a dream but Sheila isn't. Sheila is critical of family values she doesn't believe that the family can use their position in a manner that is not useful to other people around them. Finally, she is unwilling to revert to her pervious self; Sheila says to her family - "...You're ready to go on in the same old way." And Mr Birling says - "(Amused) and you're not, eh?" Sheila says - "No, because I remember what he said, how he looked and what he made me feel." This is saying that she as learnt a lot from the inspector and she is never going to return to her old self. Sheila even rejects the ring offered back by Gerald because she knows that she is not ready yet and she needs to think. . ?? ?? ?? ?? 1 Suzi Bansenga 10Y3 ...read more.