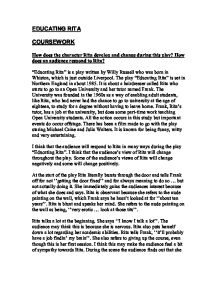 How does the character Rita develop and change during this play? How does an audience respond to Rita?

EDUCATING RITA COURSEWORK How does the character Rita develop and change during this play? How does an audience respond to Rita? "Educating Rita" is a play written by Willy Russell who was born in Whiston, which is just outside Liverpool. The play "Educating Rita" is set in Northern England in about 1985. It is about a hairdresser called Rita who starts to go to an Open University and her tutor named Frank. The University was founded in the 1960s as a way of enabling adult students, like Rita, who had never had the chance to go to university at the age of eighteen, to study for a degree without having to leave home. Frank, Rita's tutor, has a job at the university, but does some part-time work teaching Open University students. All the action occurs in this study but important events do occur offstage. There has been a film made to go with the play staring Michael Caine and Julia Walters. It is known for being funny, witty and very entertaining. I think that the audience will respond to Rita in many ways during the play "Educating Rita". I think that the audience's view of Rita will change throughout the play. Some of the audience's views of Rita will change negatively and some will change positively. At the start of the play Rita literally bursts through the door and tells Frank off for not ''getting the door fixed'' and for always meaning to do so ... ...read more.

we see a number of important decisions that Rita has to make which will determine her future. Rita didn't go to Frank's house party because she had a big fight with Denny and this starts a big conversation with Frank. Instead of going to Frank's house party Rita went to the pub with her family, they are all singing but after a while Rita's mother starts to cry. '' I looked around me mother had stopped singin', an' she was cryin' but no one could get it out of her why she was cryin' ''. This shows that Rita mother is not happy with her life of going to pubs. Rita seems to sense this and doesn't want to continue her life as it is going with Denny. Denny gives Rita an ultimatum of stop taking the pill and have a baby or to get out all together. Rita chooses to leave Denny and continue her education. This shows the audience that she is extremely determined and very strong to continue without her husband. The audience will respond to this very positively because she has chosen to sacrifice her husband to continue her education. From Act 2 Scene 1 we quickly realize that significant changes have taken place in Rita life since we last saw her. She has been to summer school and now lives in a flat with a friend called Trish. It is the changes in her character that are perhaps the most startling. When Rita comes back from summer school she is a changed women. ...read more.

This is clearly displayed when he refers to her as "The first breath of fresh air" that's been in his room for years. He is often seen flirting with Rita. Telling her there are "a thousand things" he'd "rather do than teach" most of which are with her. Although Frank is teaching Rita, Rita manages to help Frank reinvent his teaching skills as he customizes them to suit her. Despite Franks feeling for Rita he does something extremely thoughtless at one point when he invites her to his house. She isn't yet at the stage where she would comfortably fit in. Frank failed to look at it from Rita's point of view. Along the way Frank and Rita learn a lot more from each other. Frank learns is that education can 'quash' a person. He realizes or thinks that if Rita is successful in 'learning everything' (which is what she wanted in the beginning) then it will spoil what is so special about Rita. For instance the way she just comes out with things, says what is exactly on her mind, she will start to say less about what she thinks, try and make it into a 'more posh' point of view. Frank may even be scared that Rita will become a 'literary snob' like he was in the beginning. The audience grows to love Rita throughout the play just for being herself but she changes from going to summer school and through meeting Trish. Overall at the end of the play I think the audience will still love Rita even though she has changed maybe for the worse. By Sam Freeman 11P ...read more.