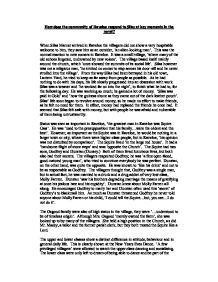 How does the community of Raveloe respond to Silas at key moments in the novel? When Silas Marner arrived in Raveloe the villagers did not show a very hospitable welcome to him, they saw him as an outsider, 'an alien-looking man'. This was the normal reaction to new comers in Raveloe. It was a small village, 'where many of the old echoes lingered, undrowned by new voices'. The village based itself mainly around the church, which 'once showed the summits of its social life'. Silas however was not a religious man, 'he invited no comer to step across his door-sill and he never strolled into the village'. From the way Silas had been betrayed in his old town, Lantern Yard, he tried to keep as far away from people as possible. As he had nothing to do with his days, his life slowly progressed into an obsession with work. Silas was a weaver and 'he worked far on into the night', to finish what he had to, for the following day. He was working so much; he gained a lot of money. 'Silas was paid in Gold' and 'how the guineas shone as they came out of the dark leather pouch'. Silas' life soon began to revolve around money, so he made no effort to make friends, as he felt no need for them. ...read more.

His medical condition also shocked people and exaggerated tales led both children and adults to be wary of him. When Silas had a fit, his 'eyes were like a dead mans' and this to many people was seen as being taken by the Devil. One day when Silas was out walking, he spotted that the 'cobblers wife'; Sally Oates, was ill and had the symptoms of heart disease and Dropsy. In Lantern Yard, because of these diseases, 'he has witnesses the precursors of his mother's death'. Silas was aware of a herb (foxglove) that would help Sally Oates to heal and as 'he felt such a rush of pity' for her and remembered his mothers suffering, he 'promised Sally Oates to bring her something that would cure her'. The rumour that Silas could heal people quickly spread through the village. Silas had felt for the first time in Raveloe, 'a strong sense of unity between his past and present life', but this feeling soon passed. The villagers now thought of him as a healer and 'his cottage was suddenly beset by mothers who wanted him to charm away the whooping cough', or men who wanted him to cure 'the knots in their hands'. Although this would have brought riches to Silas, he did not want to lie to the villagers and 'he had never known an impulse to falsity'. ...read more.

They were supposed to stay indoors and look after the children, although they were allowed to help out in the Church. Upper Class women were supposed to sit pretty and prim and not really do much. Lower class women were just merely not considered as important. They were left to get on with their lives and help their husbands at home. Silas was a lower class man, but he did eventually gain respect from a lot of people, as he was a weaver and anybody who had a trade would be important in the village, as they were probably the only one nearby who could do that particular trade. George Elliot portrayed nineteenth century life in a way that showed how important people really were and that money was not as much as it was made out to be. When Silas' friends were disloyal to him in Lantern Yard, he was 'stunned by despair' and his whole world just fell apart. He 'departed from the town' and travelled to Raveloe, to try and begin a new life. In Raveloe he was an outsider and turned to money, but when his riches were stolen he had to find something else to depend upon-and this was Eppie. Silas, once more had turned back to people and he'd found what he'd once lost, love. I feel the story holds a strong moral to it, money can't buy you love. ...read more.