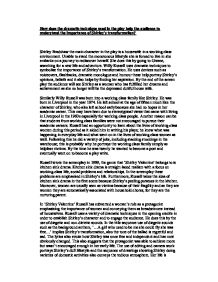 How does the dramatic technique used in the play help the audience to understand the importance of Shirleys transformation?

How does the dramatic technique used in the play help the audience to understand the importance of Shirley's transformation? Shirley Bradshaw the main character in the play is a housewife in a working class environment. Unable to stand the monotonous lifestyle she is forced to live in she embarks on a journey to rediscover herself. She does this by going to Greece, searching for a new life and adventure. w***y Russell uses dramatic techniques to symbolise the importance of Shirley's transformation. He uses devices such as voiceovers, flashbacks, dramatic monologue and humour these help portray Shirley's opinions, beliefs and it also helps by finding her aspiration. By the end of the screen play the audience will see Shirley as a woman who has fulfilled her dreams and achievement as she no longer will be the depressed dutiful house wife. Similarly w***y Russell was born into a working class family like Shirley. He was born in Liverpool in the year 1974. He left school at the age of fifteen much like the character of Shirley, who also left school early because she had no hopes in her academic career. This may have been due to stereotypical views that came with living in Liverpool in the 1960s especially for working class people. Another reason can be that students from working class families were not encouraged to pursue their academic careers. Russell had an opportunity to learn about the lives of working class women during this period as it aided him in writing his plays; he knew what was happening in everyday life and what went on in the lives of working class women as well. ...read more.

Shirley and Joe's life have been wrecked and their relationship has fallen apart. 'Remember that wall? He used to love me because I was a nutcase.' This quote suggests there past relationship, the fact that Joe loved Shirley for her 'nuttiness' showed how deeply in love with each other they were, but as time went by, their relationship became a compromise. Russell then goes back to show the flash back of Shirley in her twenties as she and Joe have just moved into the house. The flashback shows their relationship in the beginning, their love and happiness being together, Joe used to express his feelings for Shirley, 'I love you...Shirley Valentine', this shows the great distance that has formed in their relationship, how their children and Joe's work has become more important than their love for each other. Through out the flashbacks the audience is also able to view the changes that have occurred in Shirley since she was a teenager. Young Shirley had low self-esteem as her teachers often put her down. They had no hopes in her achievement because they thought she had no academic future ahead of her and that she wouldn't be able to achieve anything as she was from a working class family. This is one of the reasons Shirley had left her academic career at such a young age as no one had expectations from her and never encouraged her. This may be the same reason for w***y Russell leaving school at an early age. During the time when Russell was in school and when the screen play was written, people often stereotyped working class families of being underachievers because they didn't have as much money as others. ...read more.

Also now that Joe has joined her in Greece, the audience are left to wonder what would happen in the end, but there is a sense of calm and that there is a happy ending. For Shirley has given Joe a second chance and they are starting a new life. The fact that Joe can't recognise Shirley anymore because she's changed so much shows the drift in their relationship they have to work on. Moreover, it indicates how much Shirley has changed as she is unrecognisable, even to her own husband. But the calm sunset implies fulfilment on Shirley's behalf. Also at the end Shirley once more is the Shirley Valentine that she lost touch with, after she got married. In conclusion Shirley's Bradshaw's transformation is huge as she changes her life from being a monotonous like the British weather into someone who is full of energy and optimistic like the bright sunny weather in Greece. By the end of the novel we see that Shirley is more amusing, entertaining and like the old Shirley valentine we used to know in the past. To bring this great change in her life many people were involved these include coasts, Gillian and Joe played a great part. The dramatic techniques used such as monologue, voice over and flash backs helps us to understand more about Shirley's feelings and desires as she directly addresses her thoughts to the audience. These forms of techniques help us to understand Shirley better as she pours out her cries and happiness. ?? ?? ?? ?? ...read more.