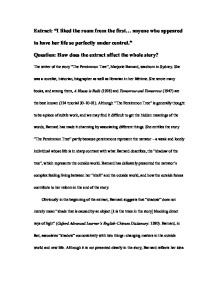 How does the extract affect the whole story? (&quot;The Persimmon Tree&quot; by Marjorie Barnard)

Extract: "I liked the room from the first... anyone who appeared to have her life so perfectly under control." Question: How does the extract affect the whole story? The writer of the story "The Persimmon Tree", Marjorie Barnard, was born in Sydney. She was a novelist, historian, biographer as well as librarian in her lifetime. She wrote many books, and among them, A House is Built (1928) and Tomorrow and Tomorrow (1947) are the best known (124 tutorial 30-10-01). Although "The Persimmon Tree" is generally thought to be a piece of subtle work, and we may find it difficult to get the hidden meanings of the words, Barnard has made it charming by associating different things. She entitles the story "The Persimmon Tree" partly because persimmons represent the narrator - a weak and lonely individual whose life is in sharp contrast with what Barnard describes, the "shadow of the tree", which represents the outside world. Barnard has delicately presented the narrator's complex feeling living between her "shell" and the outside world, and how the outside forces contribute to her reform in the end of the story. Obviously in the beginning of the extract, Barnard suggests that "shadow" does not merely mean "shade that is caused by an object [it is the trees in the story] blocking direct rays of light" (Oxford Advanced Learner's English-Chinese Dictionary: 1380). ...read more.

Barnard suggests that she "[grows] familiar with all the people in the street." and she always "[lies] looking at the shadow [that represents the outside world]..." (par.12). Because of her attention to the outside world, she can easily pick up as what Barnard says, the "regularity" of people's lifestyle. She describes people as the phony "mis-en-sc�ne" which she "never [feels] the faintest desire to become acquainted with". Here we are given a clear idea about the narrator's total disagreement with their lifestyle. In my opinion, it is also one of the factors that discourages her from abandoning her current self. We might possibly wonder why Barnard chooses persimmons to represent the narrator. In fact, she delicately, with the 'help' of the narrator, plus the features and the characteristics of the persimmons, conveys the idea. First of all, the narrator expresses her inner thought (an example of the use of the literary term, interiority): "When I [see]... my heart [moves] painfully because I [remember] the persimmon trees..."(par.5). She then further shows us her knowledge about the persimmons: "Persimmons belong to autumn and this [is] spring." (par.6). With the above statement, we are easily caught in Barnard's well-tried trap - it leads us to an important question: "Why [does] [she] always think of autumn in springtime?" ...read more.

As we can see in the end of the story, Barnard reveals that the "woman", though having tough look and assertive manner, is vulnerable: "She [stands] there naked... the scarcely distinguishable but unmistakeable form of a woman whose face [is] in shadow." (par.13). The scene is clearly presented to the narrator - it shocks her. In that very moment she comes to a sudden understanding (in literary term, epiphany) that although the "woman" looks tough, she is indeed vulnerable. Even though she seems to "have her life so perfectly under control", her "face [is] in shadow" - she is not "perfectly under [her] control". In the case, Barnard has put the narrator to a test - whether to reform or remain unchanged, i.e., to keep her current help. The story has an open ending, as there is not enough space for further development. We are not sure about what happens next, although the narrator "[thinks] [her] heart would break [that represents changes to a better self]" (par.14). However, in my opinion, Barnard succeeds in portraying the struggle of the narrator when she is put to different tests (the "shadow", the "woman" and herself). As we read the story, we can see how delicately Barnard sets each character and expresses their feelings under different settings. In conclusion, "The Persimmon Tree" is a piece subtle and delicate work. ...read more.