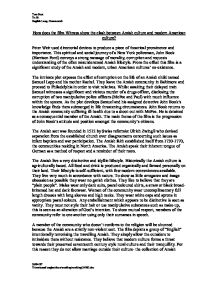 How does the film Witness show the clash between Amish culture and modern American culture?

How does the film Witness show the clash between Amish culture and modern American culture? Peter Weir used directorial devices to produce a piece of theatrical prominence and importance. This spiritual and social journey of a New York policeman, John Book (Harrison Ford) conveys a strong message of morality, corruption and requests understanding of the often misunderstood Amish lifestyle. From the offset this film is a significant study of the Amish and modern, urban American cultures' co-existence. The intricate plot exposes the effect of corruption on the life of an Amish child named Samuel Lapp and his mother Rachel. They leave the Amish community in Baltimore and proceed to Philadelphia in order to visit relatives. Whilst awaiting their delayed train Samuel witnesses a significant and vicious murder of a drugs officer, disclosing the corruption of two manipulative police officers (McFee and Paul) with much influence within the system. As the plot develops Samuel and his assigned detective John Book's knowledge finds them submerged in life threatening circumstances. John Book returns to the Amish community suffering ill-health due to a shoot-out with McFee. He is detained as a consequential member of the Amish. The main theme of the film is the progression of John Book's attitude and position amongst the community's citizens. The Amish sect was founded in 1512 by Swiss reformist Ulrich Zwingli who devised separation from the established church over disagreements concerning such issues as infant baptism and war participation. The Amish faith established itself from 1730-1770, the communities residing in North America. The Amish speak their inherent tongue of German as a method of respect and a reminder of their roots. The Amish live a very distinctive and idyllic lifestyle. Historically the Amish culture is agriculturally based. All food and drink is produced organically and farmed personally on their land. Their lifestyle is self-sufficient, with few modern conveniences available. They live very much in accordance with nature. ...read more.

This shows these young American's arrogant attitudes and their social values. They attempt to intimidate the Amish by using ice cream to paint their faces. John Book is angered by this and feels provoked to take action against the youths, Eli (Rachel's father and community elder) pre-empts John's action and mentions that- "It is not our way", John replies, "Yes, but it's my way." as he lifts himself from the carriage and strikes the opposing youth. This scene demonstrates John's lack of understanding and respect for the Amish religion. It also demonstrates the American attitude towards confrontation and the need to respond aggressively. The Amish are dedicated to religious conservation. The clothing they choose to wear is no exception. Their wear similar clothes to the founders of the Amish faith and they have no wish to identify with fashion and styles. The potential for personal vanity and pride is diminished by the Amish's plain, simplistic style of natural clothing. The Bible warns that for women to flaunt themselves is a request for men to sin. It is seen to be of consequence. Rachel's removes her traditional hat and embraces John, she could be said to be setting aside her religious inhibitions which command the modesty of women, she is violating these constraints in order to embrace John's method of living. Rachel offers John Book her deceased husband's clothing, John reluctantly accepts. This could show the deepening of John and Rachel's relationship and John's assuming of her ex-husband's position in her heart. John and Rachel share a joke over the inadequate size of the clothes on John's body. This could pre-empt John's incapability to fully accept and appreciate the Amish way of life. He could be using the clothing because of his own desire for change; he may be aspiring to the Amish method of life. This scene presents a strong literal statement. It could be said that it shows his inability to ever totally "fit in" to the Amish lifestyle. ...read more.

Because of this they have no words to speak. Eli mentions- "Be careful amongst those English" although there is a small truth in what Eli is saying, this is a humorous acknowledgement of John's spiritual progress. This non-stereotypical ending again symbolizes the great difference between the two cultures. Witness is a unique high-budget film which encapsulates both an enthralling tale of unattainable romance/police drama and an impressive profile of Amish existence. The film allows the religion to be perceived in an unbiased light for possibly the first time for many observers (with today's often sceptical and pessimistic views of religion). The director has worked extremely hard to portray the film's moral in a successful way. The strategies used are shown in my above observations. He has presented the film without judgement, just using images he has compiled through the events of John and Rachel's relationship. Weir makes the comparison clear and very comprehensible to audiences by presenting the gulf so vividly. In almost every scene they are examples of the purity and the simplicity of the Amish, in comparison to the corruption and hostile attitudes of the modern man of which we are consistently reminded. Without the use of this theme the film would be unimportant and mediocre. The other theme of the piece is quite basic and typical of the modern American film industry, made for watching pleasure rather than contemplation. This film has both these elements. If I was to criticise this motion picture in any respect, it would be to comment on the stereotypical distinction and generalisation of the two cultures. The scripter has obviously decided what he wishes to show in the duration of this piece, the film highlights only the goodness of the Amish and the corrupt side of American lifestyles. Although it is left to the viewer to decide which of the philosophies is preferable, the choice is tainted by the lack of showing the "other sides" of each culture. Author's notes: paragraph three is made up of knowledge accumulated from internet reference. Tom Foot Yr.10 English Lang. Coursework 26/04/07 C:\My Documents\The OAPs\englishcoursework1.doc ...read more.