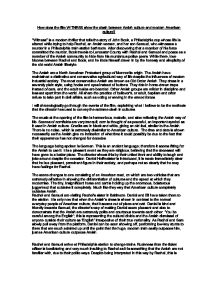 How does the film WITNESS show the clash between Amish culture and modern American culture?

How does the film WITNESS show the clash between Amish culture and modern American culture? ''Witness'' is a modern thriller that tells the story of John Book, a Philadelphia cop whose life is altered while trying to help Rachel, an Amish woman, and her son Samuel, who witnesses a murder in a Philadelphia train station bathroom. After discovering that a member of his force committed the murder, Book travels to Lancaster County with Rachel and Samuel and poses as a member of the Amish community to hide from his murderous police peers. While there, love blooms between Rachel and Book, and he finds himself drawn in by the honesty and simplicity of the old-world Amish lifestyle. The Amish are a North American Protestant group of Mennonite origin. The Amish have maintained a distinctive and conservative agricultural way of life despite the influences of modern industrial society. The most conservative Amish are known as Old Order Amish. They dress in a severely plain style, using hooks and eyes instead of buttons. They ride in horse-drawn traps instead of cars, and the adult males are bearded. Other Amish groups are milder in discipline and less set apart from the world. All share the practice of believer's, or adult, baptism and often refuse to take part in civil affairs, such as voting or serving in the armed forces. I will chronologically go through the events of the film, explaining what I believe to be the methods that the director has used to convey the extreme clash in cultures. The music at the opening of the film is harmonious, melodic, and slow reflecting the Amish way of life. Scenes of cornfields are very tranquil; corn is thought of as peaceful, an important symbol as it used in Amish culture. Credits are in black and white, giving an old feel, similar to the Amish. There is no noise, which is extremely dissimilar to American culture. ...read more.

This is something that John is completely unfamiliar with, and consequently becomes embarrassed and unsure of what to do. Rachel begins heckling John over what she was told by his sister about his insecurities and what he says when he is drunk. This is amusing to Rachel as the Amish are unfamiliar with American arrogance. Samuel burps - this would be frowned upon in American culture, but is encouraged in Amish culture as it shows good health and heartiness. The lighting is bright, harsh. People are interested in Samuel, ruffling his hair, offering him food. This is because of his separate appearance to everyone else. Americans stereotypically have a fascination with the unknown, which directly contrasts to the Amish's attitude of dismissing what are unknown/new or having long and extensive discussions before choosing to accept them. A dodgy-looking suspect signals for Samuel to approach him. Samuel complies, as he is na�ve, lacking the common sense that all of the people around him (Americans) have assumed during their lifetime. The man goes on to rattle his handcuffs against the chair that he is sitting on, intending to intimidate and scare Samuel. After being reprimanded the man ceases, and Samuel advances to a nearby glass cabinet containing various police memorabilia. Samuel recognises the man on a newspaper cutting as the murderer at the train station toilets. He turns around to look at John and begins pointing at the picture, ignorant to the seriousness of the implication that he is making. Slow, evolving music begins. Everything begins working in slow motion. John walks over and regards the newspaper cutting. His amazed face shows that he now comprehends everything that has happened, and why it has happened. John nods, Samuel smiles - silently showing understanding and appreciation between the two of them. Fast, thrilling music starts after John is shot. The whole theme of what is going is treachery, in its lowest and worst form. ...read more.

He rudely tells the woman where he will shove the camera if he is photographed, showing the contrast of John's modern American attitude that has been worsened at the acknowledgement of his partner's murder, to the laid-back harmonious attitude of the Amish which allows the tourists to do what they want, just to keep the peace and not cause trouble. A bit further on from the tourist bus are a group of yob, set on causing as much trouble for the Amish as they possibly can. This reflects American ideas of hostility towards others, and bullying. They choose to 'bully' the Amish because of their race, religion and also because they choose not to fight back, making it easier for them - American laziness. Racism is another concept that you would not find in Amish culture, but is often found in American culture. One of the ruffians completely humiliates Daniel by marking parts of his face with an ice cream. Daniel does nothing, but John is further enraged by this and chooses to defend the Amish. He proceeds to easily beat up the group of punks, giving one of them a mangled and bloody face. Eli tries to restrain John, saying 'it is not our way' but John proceeds saying 'but it's my way', a huge indication of the clash in cultures as it shows their different values. For John, a modern American, it is important to stick up for yourself. However Eli, an Amish believes that violence should be avoided at all costs, despite what the punks are subjecting them to. I believe that the film 'witness' shows the clash between Amish culture and modern American culture very effectively. It does this in great detail by throwing their two completely different worlds together and portraying their differences side by side. The exaggerated and harsh realities from both cultures are suggested in the film, playing great part in showing why the romance of John and Rachel could not thrive. The two cultures have huge differences in opinion, and outlook on life, and rarely cross each other for these reasons. ...read more.