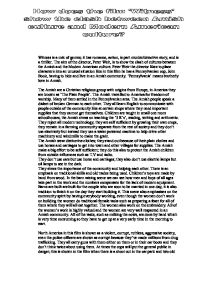 How does the film 'Witness' show the clash between Amish culture and modern American culture?

Witness is a mix of genres; it has romance, action, is part murder/detective story, and is a thriller. The aim of the director, Peter Weir, is to show the clash of cultures between the Amish and the Modern American culture. Peter Weir the director likes to place characters into an unusual situation like in this film he has a Pennsylvanian cop, John Book, having to hide and live in an Amish community. 'Pennsylvania' means brotherly love in Amish. The Amish are a Christian religious group with origins from Europe, in America they are known as 'The Plain People'. The Amish travelled to America for freedom of worship. Many of them settled in the Pennsylvanian area. The Amish people speak a dialect of broken German to each other. They all learn English to communicate with people outside of the community like at certain shops where they need important supplies that they cannot get themselves. Children are taught in small one room schoolhouses, the Amish stress on teaching the '3 R`s', reading, writing and arithmetic. They reject all modern technology, they are self sufficient by growing their own crops, they remain in a farming community separate from the rest of society and they don't use electricity but instead they use a water powered machine to help drive other machinery and windmills to make the grain. The Amish wear distinctive clothes; they stand out because of their plain clothes and use horses and carriages to get into town and other villages for supplies. The Amish make a big effort to be self sufficient; they do this also to protect the Amish children from outside influences such as T.V and radio. ...read more.

The American flag is a symbol of the government and state. Many people in America swear allegiance to the flag and country by putting a hand over their heart. It is also a symbol of the 'American Dream' where there is religious tolerance and equality of opportunity yet intolerance is shown to the Amish. The Amish have pride in their religion and way of life not in the country as they worship God. Symbols of Amish Community The Amish make homemade lemonade which shows self-sufficiency and use natural ingredients to make the lemonade; this reflects their natural and basic way of life. Also they share the lemonade which represents and shows kindness and friendship. The bell is of religious connotations as it calls people to worship but also emphasises the community spirit as it rings at mealtimes and at times is used as a call for help as this is shown near the end of the film when Samuel rings the bell and the men from the other villages and fields appear over the rise. The use of water pumps shows the rejection of modern technology and also it is natural spring water that is pumped out of it. Flour and grain emphasises traditional methods of cooking using basic ingredients. They grow their own crops on a farm and make their own bread, no pre-packed food; no additives or supplements are used by the Amish as they reject the modern way of life. Preserved fruit is a natural ingredient used to store for a long time also the Amish plan ahead when they want to use it. Washing lines were used to hang and dry off clothes once they had been hand cleaned, most of the jobs in ...read more.

Contrasting communities shown in long shot of carriage the lorry appears behind it and looks threatening towards the carriage. In the scene where Rachel is bathing it is a long shot of her bathing that then becomes a medium shot when she turns round. There is then a close up of Rachel and Johns faces where we can sense their love and desire for each other. When Rachel and John are parting there is a close up on their faces which are upset. Followed by a medium shot as he drives off after that we see another Amish man have a word with John Book and then continue to her house, there is a hint that they will eventually marry. In the station there is a long shot of a statue of an angel holding Christ's dead body, the camera tilts up as if from Samuels point of view, and then shot from over the statue looking down on Samuel its like a guardian angel looking down on him. In the film John Book becomes his guardian angel and protects him. Conclusion At the end of the film I feel disappointed that they haven't stayed together, I think she didn't go with him because she had lived in a peaceful community all her life and may have been shocked by the intrusion of violence from the outside world. She loves John, but they are from two different worlds and she also has to think about Samuel on whether or not he would be safe living in another world. The film is very successful in showing the clash of worlds and the differences in community by placing John Book in their society. Variety of techniques used to emphasise the clash. Makes us think of our own lives and violent society. ?? ?? ?? ?? ...read more.