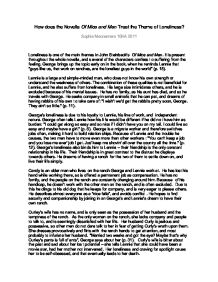 How does the novella Of Mice and Men explore the causes and consequences of violence?

How does the Novella Of Mice and Men Treat the Theme of Loneliness? Sophia Macnamara 10KA 2011 Loneliness is one of the main themes in John Steinbeck's Of Mice and Men. It is present throughout the whole novella, and several of the characters confess to suffering from the feeling. George brings up the topic early on in the book, when he reminds Lennie that "guys like us, that work on ranches, are the loneliest guys in the world" (p. 15). Lennie is a large and simple-minded man, who does not know his own strength or understand the weakness of others. The combination of these qualities is not beneficial for Lennie, and he also suffers from loneliness. His large size intimidates others, and he is excluded because of his mental issues. He has no family, as his aunt has died, and so he travels with George. ...read more.

Jus' keep me shovin' all over the country all the time." (p. 12). George's loneliness also binds him to Lennie - their friendship is the only constant relationship in his life. Their friendship is in great contrast to the distrust he displays towards others. He dreams of having a ranch for the two of them to settle down on, and live their life simply. Candy is an older man who lives on the ranch George and Lennie work at. He has lost his hand while working there, so is offered a permanent job as compensation. He has no family, and the people on the ranch are constantly changing around him. Because of his handicap, he doesn't work with the other men on the ranch, and is often excluded. Due to this he clings to his old dog that he keeps for company, and is very eager to please others. ...read more.

Her loneliness and craving for spotlight cause her to be self-obsessed, and that eventually leads to her death. Crooks is the stable-hand, named after his crooked back. He lives on his own in the stables, as he is the only black man on the ranch. Due to the racial prejudice on Californian ranches, he is treated as an outsider, and separated from the others. Living in loneliness has given Crooks a mean streak, as is seen when he suggests to Lennie that George won't come home, just to pick on him. Crooks also gets caught up in the dream of George's and Lennie's, hoping to be able to work on their dream ranch. Though the characters of Of Mice and Men are surrounded by other people, they all are isolated. The characters confessing their loneliness to strangers shows their desperation. All of them search for companionship, but it seems to be unattainable in the world of migrant workers. ...read more.