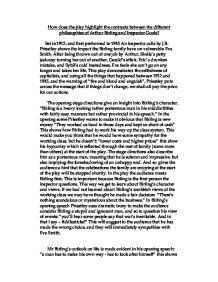 How does the play highlight the contrasts between the different philosophies of Arthur Birling and Inspector Goole?

How does the play highlight the contrasts between the different philosophies of Arthur Birling and Inspector Goole? Set in 1912, and first performed in 1945 An inspector calls by J.B. Priestley shows the impact the Birling family have on vulnerable Eva Smith. After being thrown out of one job by Arthur, Sheila's petty jealousy turning her out of another, Gerald's affair, Eric's drunken mistake, and Sybil's cold heatedness, Eva feels she can't go on any longer and takes her life. This play demonstrates the selfishness of capitalists, and using all the things that happened between 1912 and 1945, and the warning of "fire and blood and anguish", Priestley puts across the message that if things don't change, we shall all pay the price for our actions. The opening stage directions give an insight into Birling's character. "Birling is a heavy looking rather portentous man in his middle fifties with fairly easy manners but rather provincial in his speech." In the opening scene Priestley wants to make it obvious that Birling is new money "They worked us hard in those days and kept us short of cash" This shows how Birling had to work his way up the class system. This would make you think that he would have some sympathy for the working class, but he doesn't: "lower costs and higher prices" this show his hypocrisy which is reflected through the rest of family (some more than others) at the start of the play. The stage directions also describe him as a portentous man, meaning that he is solemn and impressive but also implying the foreshadowing of an unhappy end. ...read more.

Priestley used this to heighten the audiences dislike for Birling even more, especially when Eric comes out with some very good points, contradicting Birling's clouded view of the world: "what about war?" At the start of the play, the inspector values Eric's opinion more than Mr Birling does. "It isn't if you can't go and work somewhere else"..."quite so"... "(to Eric) Look you stay out of this" This, not only shows the contrasts between the Inspector and Birling, but also between Eric and Birling. Whilst the Inspector interrogates Eric he doesn't treat him very harshly because he can see that he is already feeling very guilty: "You know, don't you?" Eric already knows that the Inspector is asking about things that they should feel guilty about because he was there when the Inspector was interrogating Mr Birling. When the inspector said Eric may have to get back up again if he went to bed Eric must have known his actions would come up. Another reason the inspector must have known Eric was already feeling guilty was that Eric was obviously more willing to tell him what he had done than the others, particularly Mrs Birling who stands firmly by her beliefs, that she had done absolutely nothing wrong, all the way through. Eric represents someone with more of a conscience than Birling. Eric can see what he has done to Eva Smith is wrong. However he is also weak as he does not see these feelings through by helping Eva. Mr Birling treats Sheila more like a child, who is too na�ve to hear about these things, than a grown woman in her early twenties: "Well go to bed then." ...read more.

You could think of him just as a normal man, who, having heard of the Birling family's selfish acts, wishes to help them change for the better. Or he could be a conscience to make them feel guilty about what they've done, and stop distancing themselves from the working class. He could also be the ghost of Eva Smith in another form to make them pay for what they've done. His surname also indicates this as it is a homonym of ghoul, another word for ghost. I conclude that Birling represents the views of capitalists and the inspector represents the views of socialists. Priestley makes Birling a weak, unintelligent, ignorant and Selfish character who rambles on a bit and desperate to fit in with the higher class that he follows his wife's lead. Sybil seems to guide her husband, Telling him what he should or shouldn't say, this is made evident when she disapproves with him saying: "Good dinner too - Sybil tell cook for me." Mrs Birling would disapprove because saying what good food it was, wasn't considered a polite thing because it is like fishing for compliments from Gerald. She doesn't like him saying tell cook for me because it implies they talk to their servants, which wouldn't have been done in those days. Birling also copies Gerald's father's (his social superior) choice of wine, to make Gerald think that he is marrying into a family with as much money as his. In contrast, Priestley makes the inspector appear as a person who speaks carefully, is intelligent, knows what is going on in the world, is very strong and comes across as a kinder, selfless person; Priestley uses this to make the audience think that a socialist society will provide a fairer, more just solution to the world's problems. By Anna Mckean ...read more.