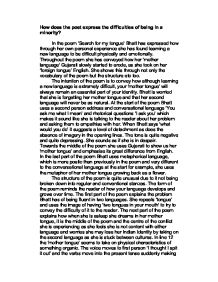 How does the poet express the difficulties of being in a minority? In the poem 'Search for my tongue' Bhatt has expressed how through her own personal experience she has found learning a new language to be difficult physically and emotionally. Throughout the poem she has conveyed how her 'mother language' Gujarati slowly started to erode, as she took on her 'foreign tongue' English. She shows this through not only the vocabulary of the poem but the structure etc too. The intention of the poem is to convey how although learning a new language is extremely difficult, your 'mother tongue' will always remain an essential part of your identity. Bhatt is worried that she is forgetting her mother tongue and that her second language will never be as natural. At the start of the poem Bhatt uses a second person address and conversational language 'You ask me what I mean' and rhetorical questions 'I ask you' which makes it sound like she is talking to the reader about her problem and asking them to empathise with her. ...read more.

She repeats 'tongue' and uses the image of having 'two tongues in your mouth' to try to convey the difficulty of it to the reader. The next part of the poem explains how when she is asleep she dreams in her mother tongue, it is the middle of the poem and the centre of the conflict she is experiencing as she feels she is not content with either language and worries she may lose her Indian Identity by taking on the second language as she is stuck between cultures. In line 12 the 'mother tongue' seems to take on physical characteristics of something organic. The voice moves to first person 'I thought I spit it out' and the verbs move into the present tense suddenly making it feel personal and immediate. However when the reader first sees the poem there eyes are immediately drawn straight to the centre of the poem where the Gujarati is written in phonetic transcript. ...read more.

It creates the effect that language is an active participant in a personal drama, rather than simply an idea being explored. Although it is used just as a metaphor for language at the beginning of the play, later on it seems to take on a life of it's own as 'it grows back'. The language allows the reader to visualise some idea of the enormity of problems faced by speakers of other languages when they attempt to take on a 'foreign tongue'. The concluding passage is rich in associations of fertility and re-growth, like spring following a barren winter e.g. 'shoots' and 'moist' etc. This contrasts with the conditionals at the beginning of the poem e.g. 'should' and 'if' etc, are a contrast to the more positive present tense verbs used at the end for example 'grows' and 'opens'. In conclusion, Bhatt conveys the difficulty of taking on a 'foreign language' whilst being in a minority through every possible aspect of the poem e.g. vocabulary, tone, structure etc. She presents a contrast between the argument of practical use of language and the emotional pull of language in a person's personal and cultural identity. ...read more.