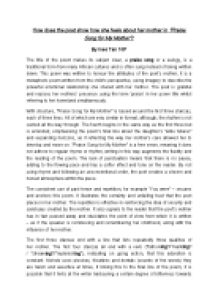 How does the poet show how she feels about her mother in Praise Song for My Mother?

﻿How does the poet show how she feels about her mother in ?Praise Song for My Mother?? By Ines Tan 10P The title of the poem makes its subject clear, a praise song or a eulogy, is a traditional form from many African cultures and is often sung instead of being written down. This poem was written to honour the attributes of the poet?s mother; it is a metaphoric poem written from the child?s perspective, using imagery to describe the powerful emotional relationship she shared with her mother. The poet is grateful and rejoices her mothers' presence using the term 'praise' in her poem title whilst referring to her homeland simultaneously. With structure, ?Praise Song for My Mother? is based around the first three stanzas, each of three lines. All of which are very similar in format, although, the rhythm is not carried all the way through. ...read more.

The repetition is effective in reinforcing the idea of security and sanctuary created by the mother. It also signals to the reader that the poet?s mother has in fact passed away and elucidates the point of view from which it is written ? as if the speaker is reminiscing and remembering her childhood, along with the influence of her mother. The first three stanzas end with a line that lists repeatedly three qualities of her mother. The first four stanzas all end with a verb (?fathoming?//?mantling?// ?streaming?//?replenishing?), indicating on going action, that this adoration is constant. Nichols uses plosives, fricatives and dentals (sounds of the words) they are harsh and assertive at times, if linking this to the final line of the poem, it is possible that it hints at the writer harbouring a certain degree of bitterness towards her mother for pushing her to independence; it is clear that she enjoyed being sheltered and protected. ...read more.

Her mother became her strength and foundation when she needed her to be. ?Sunrise? could be a metaphor demonstrating the joy and happiness that her mother brought into her life. Sunrise meaning she never set, that she never ended; she was always fresh and new. ?Rise and warm and streaming?, warmth indicates a sense of comfort, rise embodies a subtle power that her mother has and streaming displays a ceaseless love. Evocative words are used to give more strength towards Nichols? opinion on her mother and expresses how much of a important character she was in her life. And in a way, causes us, as the readers to be able to relate and in turn think of our own relationships with our parents. The fourth stanza is concentrated on food, drawing on Nichols? Caribbean roots thus giving a more personal insight into the poem. ...read more.