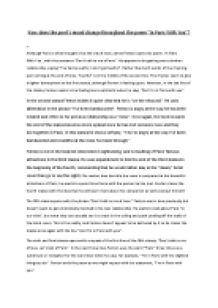 How does the poets mood change throughout the poem In Paris With You by James Fenton?

﻿How does the poet?s mood change throughout the poem ?In Paris With You?? Although Paris is often thought of as the city of love, James Fenton opens his poem, ?In Paris With You?, with the sentence ?Don't talk to me of love?. He appears to be getting over a broken relationship, saying ?I've had an earful / And I get tearful?. Rather than both words of the rhyming pair coming at the end of lines, ?tearful? is in the middle of the second line. The rhymes seem to give a lighter atmosphere to the first stanza, although Fenton is feeling upset. However, in the last line of the stanza, Fenton seems to be feeling more optimistic when he says, ?But I'm in Paris with you?. ...read more.

No matter how horrible the room is compared to the beautiful attractions of Paris, he wants to spend time there with the person he has met. Fenton closes the fourth stanza with the idea that he will learn more about his companion as well as about himself. The fifth stanza opens with the phrase ?Don't talk to me of love.? Fenton was in love previously but doesn't want to get emotionally involved in his new relationship. He wants to talk about Paris ?in our view?, but what they can actually see is a crack in the ceiling and paint peeling off the walls of the hotel room. This is the reality, and Fenton doesn't appear to be bothered by it as he closes the stanza once again with the line ?And I'm in Paris with you?. ...read more.

Throughout the poem, Fenton tries to convince himself that he loves the woman that he is with, by using the line ?I?m in Paris with you?. We see how he is physically attracted to this woman. The line ?Let?s talk of Paris,? is a euphemism for his l**t for this woman. ?In Paris With You? does have a lightness about it, even though the memories of the recent failed relationship stimulate anger. Fenton conveys the excitement and freshness of the start of a new relationship, the eagerness to get to know a person he appears to have just met. Being with that person is what matters above all. The grand places of the capital city of France have no importance; he would rather be in a shabby hotel as long as he is with that special person. ...read more.