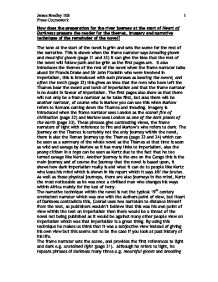 How does the preparation for the river journey at the start of Heart of Darkness prepare the reader for the themes, imagery and narrative technique of the remainder of the novel?

How does the preparation for the river journey at the start of Heart of Darkness prepare the reader for the themes, imagery and narrative technique of the remainder of the novel? The tone at the start of the novel is grim and sets the scene for the rest of the narrative. This is shown when the frame narrator says brooding gloom and mournful gloom (page 31 and 33) it can give the idea that the rest of the novel will follow path and be grim as the first pages are. It also introduces the themes of the rest of the novel when the frame narrator talks about Sir Francis Drake and Sir John Franklin who were involved in Imperialism, this is introduced with such phrases as bearing the sword, and often the torch (page 32) this gives an idea that the men who have left the Thames bear the sword and torch of Imperialism and that the frame narrator is no doubt in favour of Imperialism. The first pages also show us that there will not only be a frame narrator as he talks first, but also there will be another narrator, of course who is Marlow you can see this when Marlow refers to Romans coming down the Thames and invading. Imagery is introduced when the frame narrator sees London as the scared fire of civilisation (page 32) and Marlow sees London as one of the dark places of the earth (page 33). These phrases give contrasting views, the frame narrators of light with reference to fire and Marlow's who refers to dark. The journey on the Thames is certainly not the only journey within the novel, there is also the Roman journey up the Thames (page 33 and 34) ...read more.

This also links in with Imperialism as that contains horrors, which is shown through the job down the Congo. Marlow's view of the cruel and often foolish consequences of the trade established by colonialism can be seen in his description of the activities in his journey down the African Coast, where he says that some of the soldiers drowned in the surf but nobody seemed to care, this shows his view as he says that the steamer must go on even though some soldiers may have died in the process of the journey, this there fore means the trade must goes on. Also when he says names that seemed to belong to some sordid farce acted in front of a sinister backcloth (page 41). This gives Marlow's view as he says the trading places are part of something sordid which means disgusting and a farce this shows that he believes that the trade is a farce and as the trade is linked with the colonialism, he also thinks that's a farce too. He also says that there was a touch of insanity in the proceeding (page 42) this gives you his view as if he says the proceedings on the French steamer were insane then he must believe the same about colonialism too, he would think colonialism is insane due to him believing that the natives aren't the only ones that need to be civilised people like Kurtz also need to be civilised as they are insane. Although Marlow talks about colonialism and Imperialism being cruel and foolish one can suggest that as much as anyone else Marlow also de-humanises the black population. ...read more.

There is also a dream-like quality of Marlow's experience on the river we see this when he says we glided past like phantoms (page 63) it's a simile and to say they glided past like phantoms its gives the idea that they were floating along the river. Marlow also says he has a remote kinship (page 64) with the 'natives', this shows that as his journey has went on and on he feels closer to the natives. He also says it was ugly, this shows that he feels that although he feels almost related to the natives he sees it as an ugly thing due to the fact that they had wild passions and they were wild in their behaviour, this is shown when the natives attack (page 72) the boat which Marlow is travelling down the Congo on. Usually in everyday life you associate light and white with good and black and darkness with evil, but within the novel the distinction isn't clear. This is shown in the opening of the novel where there is light on the river, luminous estuary (page 31) but there is darkness over London, the air was dark above Gravesend (page 31), this phrase shows that there is light on the river as that is the place for the beginning of Imperialism but over London were it is dark it shows that there is darkness at the centre of Imperialism. This novel explores the issues surrounding Imperialism in complicated but strong ways. As throughout his journey he encounters cruelty, torture and close-on slavery. It shows that Europeans break down within Africa. It shows that Imperialism like wilderness may seem brilliant on the outside but when you look into it like Marlow did its not brilliant its savage and cruel. 1 James Bradley 10S Prose Coursework ...read more.