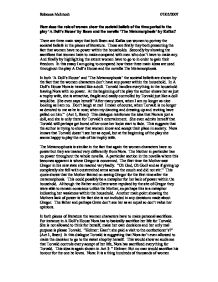 How does the role of women show the societal beliefs of the time period in the play 'A Doll's House' by Ibsen and the novella 'The Metamorphosis' by Kafka?

How does the role of women show the societal beliefs of the time period in the play 'A Doll's House' by Ibsen and the novella 'The Metamorphosis' by Kafka? There are three main ways that both Ibsen and Kafka use women to portray the societal beliefs in the pieces of literature. These are firstly they both presenting the fact that women have no power within the households. Secondly by showing the sacrifices that women have to make compared with men who don't have to make any. And finally by highlighting the extent women have to go to in order to gain their freedom. In this essay I am going to compared how these three main ideas are used throughout the play A Doll's House and the novella The Metamorphosis. In both 'A Doll's House' and 'The Metamorphosis' the societal beliefs are shown by the fact that the women characters don't have any power within the household. In A Doll's House Nora is treated like a doll. Torvald handles everything in the household leaving Nora with no power. At the beginning of the play the author shows her as just a trophy wife, she is attractive, fragile and easily controlled by Torvald just like a doll would be. ...read more.

This idea is again shown in Act 3: " Helmer: But no man would sacrifice his honour for the one he loves. Nora: It is a thing hundreds of thousands of women have." By using this dialogue the author portrays the societal beliefs very well. Women of the time period were expected to sacrifice everything for their husbands. They would have to give up their lives for them, as symbolised by Nora. However men of the time period would not be expected to sacrifice anything simply because they were seen to be of greater importance than women. The idea is reinforced by the fact that the other women characters in the play also have to make sacrifices. The nurse has to give up her child because she became pregnant within being married. So she had to give up her baby in order to fit in with the societal beliefs. Mrs Linde also has to make sacrifices; she has to give up the man she loves to marry for security in order to fit in with society. Although in The Metamorphosis it is Gregor who has to make the ultimate sacrifice both the Mother and Grete also have to make sacrifices in the novella. ...read more.

Making important decisions would also be a task that the man would traditionally take care of. Both Nora and Grete rebel in the two pieces and both are successful in gaining their freedom at the end of the play/novella. However in The Metamorphosis at the end of the novella the family lies within the restraints of the societal beliefs whereas in A Doll's House it does not. "They thought that it would soon be time, too, to find her a good husband." (58, Kafka) This quote shows that although Grete has gained her freedom she is still trapped by society. Overall in both pieces the authors are successfully able to highlight the societal beliefs of the time period by using the women characters. Ibsen and Kafka do this by showing the women characters have no power, by highlight the sacrifices the women characters must make and finally by showing the extent the women characters must go to in order to escape the societal restraints. I think in both works the authors use the women characters as a symbol for all women in society. They highlight the problems women face in trying to gain their own identity and not to just be associated with a man. ?? ?? ?? ?? Rebecca McIntosh 07/05/2007 ...read more.