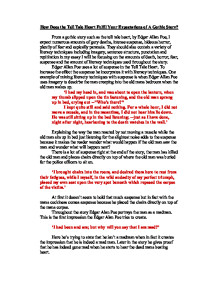 How Does the Tell Tale Heart Fulfil Your Expectations of A Gothic Story? From a gothic story such as the tell tale heart, by Edgar Allan Poe, I expect numerous amounts of gory deaths, intense suspense, hideous horror, plently of fear and espically paranoia. They should also contain a variety of literacy techniques including imagery, sentence structure, punctation and repititation in my essay I will be focusing on the amounts of death, horror, fear, suspense and the amount of literacy techniques used throughout the story. Edgar Allan Poe uses a lot of suspense in the Tell Tale Heart. To increase the effect the suspense he incorprates it with literacy techniques. One example of mixing literacty techniques with suspense is when Edgar Allan Poe uses imagery to descirbe the man creeping into the old mans bedroom when the old man wakes up. ...read more.

'I brought chairs into the room, and desired them here to rest from their fatigues, while I myself, in the wild audacity of my perfect triumph, placed my own seat upon the very spot beneath which reposed the corpse of the victim.' At first it doesn't seem to hold that much suspense but in fact with the mans cockiness comes suspense because he placed the chairs directly on top of the mans corpse. Throughout the story Edgar Alan Poe portrays the man as a madman. This is the first impression the Edgar Alan Poe tries to create. 'I had been and am; but why will you say that I am mad?' Here he's trying to state that he isn't a madman when in fact it creates the impression that he is indeed a mad man. ...read more.

I then smiled gaily, to find the deed so far done. But, for many minutes, the heart beat on with a muffled sound. This, however, did not vex me; it would not be heard through the wall. At length it ceased. The old man was dead.' Here is where the old man was killed. When the man killed him and even after he showed no remorse for him. No sympathy. No regret. All he could do was smile as he killed him showing him as an evil madman. In conclusion the story Tell Tale Heart by Edgar Alan Poe fulfilled my expectations of a typical horror story. It included suspense and drama, murder and paranoia. It played on the fact that the eye was evil and gave a brilliant imagery of the eye all the way through the story but at the same time portraying the old man as a frail innocent old man sucked into the warped mind of the man obsessed with the vulture eye. ...read more.