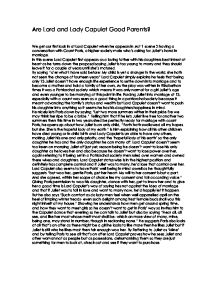 Are Lord and Lady Capulet Good Parents? We get our first look in at Lord Capulet when he appears in Act 1 scene 2 having a conversation with Count Paris, a higher society male who's asking for Juliet's hand in marriage. In this scene Lord Capulet first appears as a loving father with his daughters best intrest at heart as he turns down the proposal saying Juliet is too young to marry and they should leave it for a couple of years until she's matured. By saying "o'er what I have said before: My child is yet a stranger in the world; she hath not seen the change of fourteen years" Lord Capulet simply explains he feels that being only 13 Juliet doesn't have enough life experience to settle down into marriage and to become a mother and hold a family of her own, As the play was written in Elizabethan times it was a Patriarchal society which means it was only normal for a girl Juliet's age and even younger to be marrying at this point in life. Forcing Juliet into marriage at 13, especially with a count was seen as a good thing in a patriarchal society because it meant advancing the family's status and wealth but Lord Capulet doesn't want to push his daughter into anything so it seems he has his daughters happiness in mind. He nicely lets Paris down by saying "Let two more summers wither in their pride Ere we may think her ripe to be a bride." Telling him that if he lets Juliet live free for another two summers then this time in two years shed be perfectly ready for marriage with count Paris, he opens up about how Juliet is an only child, "Earth hath swallowed all my hopes but she. She is the hopeful lady of my earth." Is him explaining how all his other children have died young or in child birth and Lady Capulet is un able to have any others, ...read more.

This all uses dramatic irony as well because Lady Capulet thinks Juliet's crying over the loss of her Cousin when really she's Crying over missing her secret husband and Shakespeare uses dramatic irony again when Lady Capulet says "well, girl, thou weep'st not so much for his death as that the villain lives which slaughtered him." Telling Juliet she's not really crying over the death of Tybalt she's crying over the fact Romeo is still alive, which is dramatic irony as Juliet and the audience know that Romeo is actually her Husband. As the Conversation continues Juliet cheers up a little by teasing her mother using dramatic irony and double entendre's. Juliet pretends she doesn't know what her mums on about and askes "what Villlain, Madam?" even though she knows full well her mother means Romeo. Lady Capulet reply's "that same villain, Romeo." Juliet then says "God pardon him! I do, with all my heart- and yet no man like he doth grieve my heart" saying she forgives Romeo with all her heart and that no man like her makes her heart ache more then Romeo, but says it sneakily using dramatic irony because she means it in the way that she loves him and he makes her heart ache because she misses him so much and we know that too but her mother doesn't and thinks she means that she hates him. Lady Capulet tries to make her daughter feel better by saying "where that same banished runagate doth live, shall give him such an unaccustomed dram that he shall soon keep Tybalt company- then I hope thou will be satisfied." Meaning she was planning on sending poison to Romeo in order to kill him, in a panic Juliet says "Indeed, I never shall be satisfied with Romeo till I behold him- dead- is my poor heart, so for a kinsman vexed. Madam, if you could find out but a man to bear a poison, I would temper it That Romeo should upon receipt thereof soon sleep in quiet." ...read more.

Lord Capulet then turns to say "and with my child my joys are buried." Saying now all his children are dead and all his joys and hope lay buried. After a whole page of emotional adjectives and extended metaphors of grief Friar Lawrence steps in and tells Lord and Lady Capulet what he really thinks of them and how bad parents they really are saying it was them who did this to her as all they really cared about was advancing there family wealth and promoting there daughters status they didn't care about her happiness and that's why in his opinion she's in a better place away from her bad parents. Lord Capulet doesn't react to Friar Lawrence's speech or take responsibility by admitting he has killed his daughter, he's feeling guilty but he wants to ignore the fact that its all his fault, showing he has no backbone and ignoring all natural emotion he immediately starts funeral planning. Finally we come to Act 5 Scene 3 where Romeo comes back, and entering Juliet's tomb drinks poison and dies. Juliet then awakes and seeing Romeo stabs herself with Romeo's dagger. Prince Escalus has a go at the Capulet's and Montague's saying "Where be theses enemies? Capulet, Montague? See what a scourge is laid upon your hate, that heaven finds means to kill your joys with love! And I, for winking at your discords too, have lost a brace of kinsmen. All are punished" The Family's finally make peace after seeing what harm their feud has really done and agree to build statue's of Romeo and Juliet but still ignore responsibility of the deaths. Bearing all things into consideration and there appearances in this play my judgement on Lord and Lady Capulet are that they are bad parents, they were never there for there daughter and pushed her into things to benefit them, not for her own good. They didn't care for her happiness or well being, just for there own and they hold full responsibility for there daughters death. They were not good parents. ...read more.