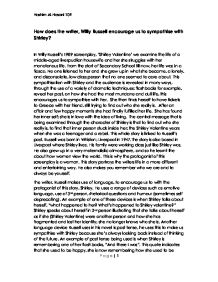 How does the writer, w***y Russell encourage us to sympathise with Shirley?

How does the writer, w***y Russell encourage us to sympathise with Shirley? In w***y Russell's 1989 screenplay, 'Shirley Valentine' we examine the life of a middle-aged liverpudlian housewife and her she struggles with her monotonous life. From the start of Secondary School till now, her life was in a fiasco. No one listened to her and she grew up in what she became, a lonely, and disconsolate, low class person that no one seemed to care about. This sympathisation with Shirley and the audience is revealed in many ways, through the use of a variety of dramatic techniques; flashbacks for example, reveal her past, on how she had the most mundane and dull life, this encourages us to sympathise with her. She then finds herself to have tickets to Greece with her friend, still trying to find out who she really is. After an affair and few happy moments she had finally fulfilled her life. She has found her inner self; she is in love with the idea of living. The central message that is being examined through the character of Shirley is that to find out who she really is, to find that inner person stuck inside her; the Shirley Valentine years when she was a teenager and a rebel. ...read more.

with an angry rage and pushes the eggs and chips onto Shirley's lap, as this quote explains, "With a violent shove Joe pushes the food onto Shirley's lap." This quote explains that Joe has shown his feelings directed to Shirley in a different way. We sympathise with Shirley for reason that she has only done her job to cook food and do all the chores in the house The writer, w***y Russell aims to make us sympathise for Shirley and other working class people in Shirley's position e.g. (the writer himself trying to tell us ho hard life in working class is) is by using dramatic devices. The author uses many dramatic devices such as Flashbacks, Voice Over's (VO), Dramatic Monologue, Pathetic Fallacy and Music. These devices allow the reader to learn more about the protagonist of this story, Shirley. Russell makes use of a key dramatic device which is flashbacks. As Shirley evokes, flashbacks are used to show events from her past. One of the most earliest and main flashbacks Russell uses to attempt and make us sympathise for Shirley is when she is in her high-school days. ...read more.

never appreciated by anyone until the day she when to Greece and had the time of her life, when she found out who she was, that was also the day when her friends and family finally realized that she does have a life and that she is a major importance in their life. They also realized that she was real person with real a feeling, who deserved to be treated with respect and gratitude just like anybody else. People started to treat Shirley just the way she always wanted to be. She finally let her young inner person inside her, out and she liked herself just for being- herself, Shirley Valentine. I think that the devices that the writer uses in order to evoke sympathy to the audience has been successful because the way he makes Shirley flashbacks really emotional for example, when he uses pathetic fallacy for when she has just seen Marjorie Majors go off in her taxi, saying "Goodbye Shirley Valentine" her mood changes to sadness while she walks down the deserted road and the colour changes into blue it then begins to rain. Hashim Al-Hasani 10R 1,953 words ?? ?? ?? ?? Hashim Al-Hasani 10R Page| 1 ...read more.