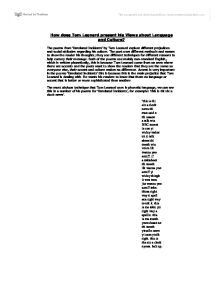 How does Tom Leonard present his Views about Language and Culture?

How does Tom Leonard present his Views about Language and Culture? The poems from 'Unrelated Incidents' by Tom Leonard explore different prejudices and social attitudes regarding his culture. The poet uses different methods and means to show the reader his thoughts; they use different techniques for different reasons to help convey their message. Both of the poems use mainly non-standard English, which is written phonetically, this is because Tom Leonard come from an area where there are accents and the poets want to show the readers that they are the same as everyone else, their accent and culture makes no difference. Accent is very important in the poems 'Unrelated Incidents' this is because this is the main prejudice that Tom Leonard is dealing with. He wants his readers to know that there no language or accent that is better or more sophisticated than another. The most obvious technique that Tom Leonard uses is phonetic language, we can see this in a number of his poems for 'Unrelated Incidents', for example: 'this is thi six a clock news'. 'this is thi six a clock news thi man said n thi reason a talk wia BBC accent iz coz yi widny wahnt mi ti talk aboot thi trooth wia voice lik wanna yoo scruff. ...read more.

Leonard also feels class pride. He sees his regional working class dialect as a mark of his working class background, and he does not want to 'talk posh', which would be to 'sell out' to the establishment. You can see this in the poem when the newsreader says: 'jist wanna yoo scruff tokn.' The word 'just' is dismissive and shows how Leonard objects to 'toffs' calling his regional working class dialect 'the language of the gutter', to be ignored or used only for comic effect - his dialect, he believes, is fit for reading the news. Leonard is sarcastic. He does not really dismiss the Glaswegian dialect as lies. The newsreader in the poem says: 'this is ma trooth' - but Leonard does not say so; truth is truth whatever accent you say it in. This shows that despite the humour of the poem, Leonard is angry. For its structure, the poem is written as a single, unbroken verse, without any punctuation except a few full stops. This is to make it feel like an angry 'rant' (outburst). The lines are short - including one two-word line: 'thi trooth' - to emphasise the key points, and to make the poem aggressive and 'direct'. ...read more.

These questions are asked by Southern accented people because they sound like the people in power. (E.g. the Queen, PM). This is what the poet is angry about, the fact that people judge other people on their accents. In the first paragraph of the poem we can see that it says 'I remember being ashamed of my father when he whispered the words out loud reading the newspaper.' The reason that Leonard's father had to read out loud is because of his illiteracy and this shows to things - education and his accent. Relating to education is a political cultural reference. The accent shows his status in society and thus how people judge other people on their accents. Finally, in the last paragraph we see that after the question it says: 'The poetry reading is over. I will go home to my children.' This tells the reader that Tom Leonard is now the father and that because when Tom Leonard was a child he was ashamed of his father, people are saying to Leonard now to get rid of your accent to stop your children from being ashamed. Tom Leonard's role has changed. In conclusion, Tom Leonard presents his view on language and culture in two very different ways to portray his message in these two poems, one though phonetic and colloquial language and the other through questions and personal experience. ...read more.

This essay asks candidates to discuss how the Scottish poet Tom Leonard presents his views of culture. The key here is to comment on the poetic devices and the attitudes conveyed in his poetry (the candidate has chosen 'Unrealted Incidents', ...

This essay asks candidates to discuss how the Scottish poet Tom Leonard presents his views of culture. The key here is to comment on the poetic devices and the attitudes conveyed in his poetry (the candidate has chosen 'Unrealted Incidents', a series of poems which the candidate appropriately notes "explore different prejudices and social attitudes regarding his culture". The foucs on the question is consistent, and there is some contextual appreciation evident as well. Overall, this exam response is a very wel-evidence piece of work written by a knowledgeable candidate, though extra practice in writing concisely may be required as this is not reflective of the content that many candidates could write in one hour including planning and proof-reading.

The Level of Analysis is very good here. The candidate comments on a wide range of poetic devidces employed by Leonard to expose the prejudices against his culture, with the candidate also recognising contextually, how an RP accent (or "BBC newsreader" accent) is often deemed the 'right' way to speak, and any other dialectal variation considered unfit for reasons of 'propriety', hence why the news is read by speaker with an RP accent.
The candidate comments on Leonard's phonetic use of laguange; the involvement of the reader via rhetorical questions, Second Person address and accusatory language; the effect on the reader; and also the attitudes the Leonard displays in his poems towards culture ("Leonard also feels class pride", "Leonard is sarcastic", "the word Ã¢â‚¬ËœbeltÃ¢â‚¬â„¢ carries the idea of being hit/punished and makes it very aggressive, even violent"). All in all, this is a very well-constructed answer that discusses numerous elements in 'Unrelated Incidents' that show the poet's attitude to langugage and culture, with an excellent use of quotes to evidence the points the candidate makes.

The Quality of Written Communication is fine. There is limited use of puncutation, though the candidate's use of lanugage and a wide range of grammar more than show the examiner a worthy candidate for a top band answer.