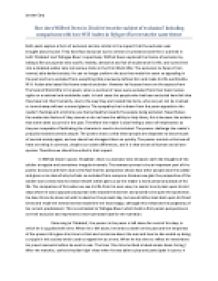 How does Wilfred Owen in Disabled treat the subject of exclusion? Including comparisons with how W.H Auden in Refugee Blues treats the same theme

﻿Jordan Carp How does Wilfred Owen in Disabled treat the subject of exclusion? Including comparisons with how W.H Auden in Refugee Blues treats the same theme ________________ Both poets explore a form of exclusion and are similar in the respect that the exclusion was brought about by war. They have face exclusion due to similar circumstances and this is outlined in both ?Disabled? and ?Refugee Blues? respectively. Wilfred Owen explored the theme of exclusion by taking a fine young man who was fit, healthy, attractive and full of exuberance for life, and turned him into a disabled soldier who lost various limbs in the First World War. The exclusion he faces is from normal, able-bodied society. He can no longer perform the acts that made him seem so appealing in the past and he is excluded from everything that previously defined him and made his life worthwhile. W.H. Auden also based his theme around exclusion. However he focussed more on the aspects from The Second World War in his poem, when a number of races were excluded from their basic human rights on a national and worldwide scale. In both cases the people who had been excluded have felt that they have lost their humanity, due to the way they are treated like items, who can just not be involved or turned away without a second glance. The sympathy that is drawn from the poem appeals to the reader?s feelings and emotions; you feel sympathy towards the people being excluded. Nevertheless the reader also feels as if they cannot or do not have the ability to help them; this is because the actions that were taken occurred in the past. Therefore the reader is also feeling a sense of helplessness as they are incapable of facilitating the character?s need to be included. The poems challenge the reader?s prejudice towards certain people. The poems show us that these people are desperate to become part of normal society again, and we should not disregard them so quickly. ...read more.

Lastly, in the sixth line it says ?Why don?t they come/And put him into bed? Why don?t they come?? this is the ultimate sacrifice that he has had to make from his exclusion. He no longer holds the ability to care for himself; he has become reliant on others for treating and caring for him. This is what has seperated him from others, he has lost touch with his pride due to the fact he requires assistance for everything he does, so he is excluded from society because of this, and the heavy burden that comes with it. ?Refugee Blues? is told from a Jewish refugee?s perspective and includes cruel and harsh irony when portraying the story and situation to another Jewish refugee. When the story is being told from the first person perspective, it captivates the audience and portrays the figure to be a strong, yet vulnerable person. Strong because he is being excluded from nearly every society or community that there is, however they stay strong and to his course. However, these are the exact same traits that make them such vulnerable people too. The first obvious similarity between ?Disabled? and ?Refugee Blues? is the time it was set, at the outbreak of the Second World War. However ?Disabled? only portrays the trouble of a single person from the war, whereas ?Refugee Blues? covers a whole religion and race. ?Disabled? evokes pity in such a way that you feel you can no longer help the man. The man in ?Disabled? is also not telling his own story, so in ?Refugee Blues? where the character is, there is a stronger emotional connection. It is also told in a way that insinuates something can be done to resolve their predicament. This is a way that the character in ?Refugee Blues? emerges as more of a sincere figure due to the lack of personal information and the vagueness of the way in which they speak of the event of the war. ...read more.

All of these aspects Owen used to his advantage to produce one figure that represents a whole group of people that have been led wrongly astray by the prospect of war. In ?Refugee Blues? Auden?s use of power over the masses propels the poem forward, throughout the whole poem there is the on-going perception of people in higher power than the refugees not allowing them freedom. This technique of powerlessness was applied to many people not only in the Second World War, but it is also applicable in modern society. There is always a greater power that has control over you, although it was in this case, as power that had twisted ideals. Auden?s use of the third and final line of each stanza not rhyming epitomised the refugees own exclusion from society. Auden also portrays the refugees as calm and collected, despite the wrong doings they are encountering of the bureaucrats. This causes the reader to form an emotional attachment with the refugees as despite their hardships, they are still persistent and still believe in hope. This causes a demand of respect towards the refugees. The techniques that Auden use are combined to make a wholesome character that not only attracts sympathy for their strenuous predicament, but also pulls in the strength and heartfelt assurance purely because of the fact that the refugees continue to be excluded from the societies of many nations. The refugees represent lonesome characters because of their exclusion; however they are not alone because of this. At this time in the war there were millions of refugees seeking acceptance into many countries. The refugees displayed in Auden?s poem however stand as a symbol that not only shows them as being strong and heavy minded, but this is a fair representation of the whole community of refugees who had to flee countries this time. The aspect that caused the refugees to leave their homes was also the one thing that brought them closer together. ...read more.