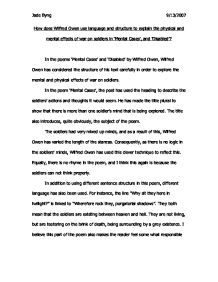 How does Wilfred Owen use language and structure to explain the physical and mental effects of war on soldiers in 'Mental Cases', and 'Disabled'?

How does Wilfred Owen use language and structure to explain the physical and mental effects of war on soldiers in 'Mental Cases', and 'Disabled'? In the poems 'Mental Cases' and 'Disabled' by Wilfred Owen, Wilfred Owen has considered the structure of his text carefully in order to explore the mental and physical effects of war on soldiers. In the poem 'Mental Cases', the poet has used the heading to describe the soldiers' actions and thoughts it would seem. He has made the title plural to show that there is more than one soldier's mind that is being explored. The title also introduces, quite obviously, the subject of the poem. The soldiers had very mixed up minds, and as a result of this, Wilfred Owen has varied the length of the stanzas. Consequently, as there is no logic in the soldiers' minds, Wilfred Owen has used this clever technique to reflect this. Equally, there is no rhyme in the poem, and I think this again is because the soldiers can not think properly. In addition to using different sentence structure in this poem, different language has also been used. ...read more.

The word "dead" has been included in one of the lines, but has been spelt with a capital D, even though it is not at the beginning of the line. It has been personified, and has been made like this so that "Dead" can be used as a word to emphasize the word, and make it powerful - as death is one of the main outcomes of war. Wilfred Owen also uses language to explore the physical and mental effects on the soldiers by using assonance. For instance, "batter" and "shatter" were the words Wilfred Owen used to describe the bones rattling, as they get hit by the gun's bullet. I noticed whilst reading the poem that there was a range of punctuation throughout the poem. Dashes and semi colons were used quite frequently. This is because Wilfred Owen wanted a lot of dramatic pauses, so that the reader could stop, think and reflect on what they have read. Following this, the line "drooping tongues from jaws that slob their relish", suggests that the soldiers have lost physical control, and this line portrays the image of a wild animal that is wandering around aimlessly with its tongue hanging out. ...read more.

The line "misery swelters" shows that from every tiny part of the solider, misery pours out. I think the word "swelters" describes the misery as if it is "sweat", which is continuously pouring out, like the misery they are experiencing. Following that, the line "dawn breaks open like a wound that bleeds afresh", shows using a simile. As dawn breaks, it is the start of a fresh new day, and produces an orangey-red colour. In comparison, this is what the wound is like. Meanwhile, "therefore still their eyeballs shrink, tormented", means it hurt them every time to remember. They get up every morning and realize that life goes on, but unfortunately all of their old pain and mental scars still remain. "Ravished" means minds have been overtaken and controlled by death. This relates to the part of the poem where it says "why won't they come?" as this also shows a sense of "brainwashed mind" by death. Ultimately, Wilfred Owen has clearly shown that war has affected the minds of soldiers who were at war. The thoughts of their experiences will remain with them eternally, and so will their physical scars. Jade Byng 9/13/2007 ...read more.

This answer is a very well focused response to a question orientating around the exploration of physical and mental torture of innocent soldiers as shown by Wilfred Owen's use of language and structure in his poems 'Mental Cases' and 'Disabled', ...

This answer is a very well focused response to a question orientating around the exploration of physical and mental torture of innocent soldiers as shown by Wilfred Owen's use of language and structure in his poems 'Mental Cases' and 'Disabled', though it could be argued that there is a very large bias towards the analysis of 'Mental Cases' and comparatively very little on 'Disabled'. This shows that, whilst the analysis on 'Mental Cases' is great and the candidate won't be penalised for it, there is a slight digression from the steer of the question and therefore the candidate loses marks not for where they over-comment on 'Mental Cases', but where they do not comment on 'Disabled'. It is important that a balance is maintained, particularly in essays like this, which as for two aspects of analysis from two different poems.

The Level of Analysis shown starts of very well, and makes a good point commenting on the poetic devices Owen uses in 'Mental Cases'. Later on, there is only a brief mention of 'Disabled' and then the candidate reverts back to being focused on 'Mental Cases'. This is by no means bad, but it does not satisfy the question, which required a balanced answer.
The depth of analysis shown is entirely indicative of a strong B grade candidate for GCSE. A few moments could see a better use of terminology such as "syllabic rhythm" and "rhyme scheme" when referring to how the stanza lengths are disjointed and very irregular. The candidate does very well though, to realise that this is representative of the fragmentation of psychosis - something the soldiers were subjected to.
The language analysis of 'Mental Cases' is a very strong A grade response on it's own, but it is let down by a lesser focus on the structure of both poems and the language analysis of 'Disabled'. I like would've liked to have also seen more depth at certain points, for instance, what is the real effect of assonance with "batter" and "shatter". The internal rhyme draws the attention immediately to it, and in a poem full of irregular, disjointed rhythm and rhyme, it sticks out prominently and the gruesome imagery of "flying muscles" blown apart from their bodies also stays with the reader.

The Quality of Written Communication is average. There is a good use of the English language to explain the candidate's answer and there are no moments where the clarity of written expression is compromised by a poor misuse of English.