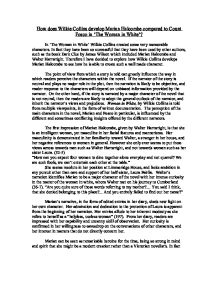 How does Wilkie Collins develop Marian Halcombe compared to Count Fosco in 'The Woman in White'?

How does Wilkie Collins develop Marian Halcombe compared to Count Fosco in `The Woman in White'? In `The Woman in White' Wilkie Collins created some very memorable characters. In fact they have been so successful that they have been used by other authors, such as the book Dark Clue by James Wilson which included Marian Halcombe and Walter Hartwright. Therefore I have decided to explore how Wilkie Collins develops Marian Halcombe to see how he is able to create such a well made character. The point of view from which a story is told can greatly influence the way in which readers perceive the characters within the novel. If the narrator of the story is neutral and plays no major role in the plot, then the narration is likely to be objective, and reader response to the characters will depend on unbiased information provided by the narrator. On the other hand, if the story is narrated by a major character of the novel that is not neutral, then the readers are likely to adopt the general outlook of the narrator, and inherit the narrator's views and prejudices. Woman in White, by Wilkie Collins is told from multiple viewpoints, in the form of written documentation. ...read more.

In fact the character has been used in another modern book, as late as 2001 with `The Dark Clue' which shows just how before its time this book was. Through the eyes of Count Fosco, we view Marian as a charming, ingenious and beautiful woman. From his narrative, readers become aware of her physical attractiveness and feminine charm. His adoration of Marian contradicts her asexual nature that has been demonstrated up to the point of his narrative. Fosco, who has been shown to be incapable of modesty, bows to her courage and perseverity, as well as the skill that she employed in pursuing him, both in his postscript to her diary (343) "The tact which I find here, the discretion, the rare courage, the wonderful power of memory, the accurate observation of character, the easy grace of style, the charming outburst of womanly feeling" and his confession letter, where he names her "the first and last weakness of Fosco's life" (627). In comparison to Marian, Count himself, readers receive a favorable impression of him before he even appears in the story line, whereas Marian is at first described as ugly by Walter. In Marian's diary, his virtue is demonstrated by the account of his rescue of Sir Percival in Rome (193). ...read more.

But at the same time his obese physical features, the ease of which he can manipulate others (including her), and her dear half-sister Laura's general distrust of him leave Marian unsure of how to judge him. In contrast, the narrative from Frederick Fairlie, the undoubtedly eccentric uncle of both Marian and Laura, describes the count as "...an alarmingly large person...refreshingly dressed in summer costume; his manner was delightfully self-possessed and quiet-he had a charming smile."(Collins 309) Because of his apparent concern and good intentions for the well-being of Marian and Laura, and the counts attention to minding all of Mr. Fairlie's sensitivities; we are at this point left with an almost pleasant taste in our mouths regarding the Count. Overall we can see that the one of the ways Wilkie Collins managed to make Marian intelligent and clever, as well as modest is due to the book being written in different perspectives. She also shows care and compassion when she seems to have no ambition but to offer support to her half-sister Laura. She then proves this by writing by writing about her admiration towards Laura. Then she is described as being beautiful and charming by Count Fosco. It is perhaps all these qualities together that make her seem such as good character. ...read more.