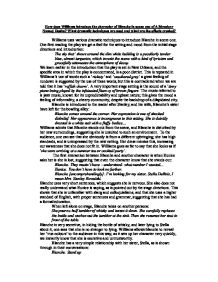 How does Williams introduce the character of Blanche in scene one of A Streetcar Named Desire? What dramatic techniques are used and what are the effects created?

How does Williams introduce the character of Blanche in scene one of A Streetcar Named Desire? What dramatic techniques are used and what are the effects created? Williams uses various dramatic techniques to introduce Blanche in scene one. One first reading the play we get a feel for the setting and mood from the initial stage directions and introduction: The sky that' shows around the dim white building is a peculiarly tender blue, almost turquoise, which invests the scene with a kind of lyricism and gracefully attenuates the atmosphere of decay. We learn earlier in the introduction that the play is set in New Orleans, and the specific area in which the play is concentrated, is a poor district. This is repeated in Williams's use of words such a 'rickety' and 'weathered grey' a great feeling of rundown is suggested by the use of these words, but this is contradicted when we are told that it has 'raffish charm'. ...read more.

Williams goes as far to say that she looks as if 'she were arriving at a summer tea or cocktail party'. The first interaction between Blanche and another character is when Eunice asks her is she is lost, suggesting that even the character know that she stands out: Blanche: They mustn't have - understood- what number I wanted... Eunice: You don't have to look no further. Blanche [uncomprehendingly]: I'm looking for my sister, Stella DuBois, I mean Mrs. Stanley Kowalski. Blanche uses very short sentences, which suggests she is nervous. She also does not really understand what Eunice is saying, as is pointed out by the stage directions. This shows that she is unfamiliar with slang and colloquialisms, and that she uses a higher standard of English, with proper sentences and grammar, suggesting that she has had a formal education. When left alone on stage, Blanche takes on another persona: She pours a half tumbler of whisky and tosses it down. ...read more.

Blanche also shows her vain side when talking to Stella, with her constantly craving attention and appraisal, especially concerning her fading looks, suggesting that she has a weak character and needs constant reassurance, or that she is in a depressed current state of mind and needs comforting. However, her interaction with Stanley is very different: Stanley: Didn't know you were coming into town. Blanche: I - uh - Stanley: Where you from, Blanche? Blanche: Why, I - live in Laurel. Previously, in her conversation with Stella, Blanche had dominated the conversation, now, she seems very nervous and hesitant, revealing herself not to be as confident as she thinks she is. Williams's use of dramatic techniques, such as leaving Blanche alone on stage, and the constant musical beat of play, has quickly entered Blanche into the story, and explained her character very quickly to the audience, but perhaps setting her up for a fall, with all of the bad things he has shown her to be. ...read more.