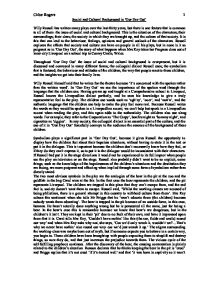 How does Willy Russell Convey Social and Cultural Background in 'Our Day Out'?

Social and Cultural Background in 'Our Day Out' Willy Russell has written many plays over the last thirty years, but there is one feature that is common to all of them: the issue of social and cultural background. This is the situation of the characters; their surroundings; their class; the society in which they are brought up, and the culture of that society. It is this that can lead to the behaviour, feelings, opinions and general outlook of the characters. Russell explores the effects that society and culture can have on people in all his plays, but in none is it so poignant as in 'Our Day Out', the story of what happens when Mrs Kay takes her Progress class out of inner-city Liverpool on a school trip to Conwy Castle, Wales. Throughout 'Our Day Out' the issue of social and cultural background is ever-present, but it is discussed and conveyed in many different forms; the colloquial dialect Russell uses; the symbolism that is featured; the behaviour and attitudes of the children; the way that people react to these children, and the insights we get into their family lives. Willy Russell himself said that he writes for the theatre because 'it's concerned with the spoken rather than the written word'. In 'Our Day Out' we see the importance of the spoken word through the language that the children use. Having grown up and taught at a Comprehensive school in Liverpool, Russell knows the Liverpudlian dialect perfectly, and he uses his knowledge to give a truly representative feel to the play. The children use words such as 'agh'ey', 'ooer', and 'nott'n', and the authentic language that the children use help to make the play feel more real. Because Russell writes the words as they would be spoken in a Liverpudlian accent, we can't help but speak in a Liverpudlian accent when reading the play, and this again adds to the authenticity. ...read more.

stop smoking, and who says that his father 'belts' him, not because he is smoking, but because he won't give him a cigarette. This conversation that Andrews has with Briggs reveals a lot about his family background, and through that the social and cultural background. We learn that Andrews' parents are not concerned that there son smokes, and that his father 'comes round every now an' then an' has a barney with (his) mam' and 'then he goes off again.' Andrews thinks that 'he tries to get money off her (Andrews' mother) but she won't give it him though. She hates him.' Andrews says, 'We all hate him.' After Andrews has said this there is a pause because Briggs doesn't seem to know what to say. It is also revealed slightly earlier, when Andrews wants a cigarette from Reilly and Digga but can't have one because he hasn't got any money, that his mother is a prostitute. Digga says 'your ma's loaded' and when Andrews disagrees Reilly says 'Well she should be...all the fellers she picks up on the Parly.' At this point we suddenly feel a real compassion for Andrews; he has no future and no stable family unit to fall back on. Russell reveals the dysfunctional and almost tragic background that Andrews, and doubtlessly some of the other children, come from in such a way as makes it more affecting. In the same scene it is revealed that Reilly's mother is dead, when Reilly says, 'Sir, I swear on me mother.' and Digga tells Briggs not to believe him, 'How can he swear on his mother. She's been dead for ten years.' Then Reilly tells Briggs that his dad works on the docks and 'He hates it.' When Briggs asks, 'His job or the place?' Reilly replies 'The whole lot.' With these sorts of backgrounds it is hardly surprising that these children are in the Progress class, and that they smoke, swear and behave the way they do, 'like animals.' ...read more.

She wanted to give them a good day out, but she also showed them the world that isn't within the grasp of these children; she made them aware of what they haven't got and could never hope to have, and Mrs Kay knows that as well as Carol does when she tells Mr Briggs, 'Don't be friggin' stupid' after he has suggested that if she works hard and gets a good job she could move to somewhere nice when she's old enough. When I read 'Our Day Out', I don't see it as a fictional play, but as a window opening onto an unceasing society and a culture wholly different from my own. It doesn't seem as if it is a story, but a documentary, and I think this extent of authenticity can only be reached when the playwright has direct experiences to draw on such as Willy Russell has. He has lived and worked in this society, so although the characters are entirely fictional, to some degree the story isn't. The poignancy and intensity of the play is somewhat masked in places by the comedy, but we do catch glimpses of the hopeless, desperate situation these children are facing. As Mrs Kay says, 'Ten years ago you could teach them to stand in a line, you could teach them to obey, to expect little more than a lousy factory job. But now they haven't even got that to aim for...There's nothing for them to do, any of them; most of them were born for factory fodder, but the factories have closed down.' Throughout the play this is the underlying tone, and the subtle way that Russell conveys this message heightens the effect when it comes. This day out is simply an oasis; one day of fun out of their whole lives, and at the end of it we see how the glimmer of something bright and beautiful makes it all the harder to turn your eyes back to the grey and mundane. 1 Chloe Rogers ...read more.