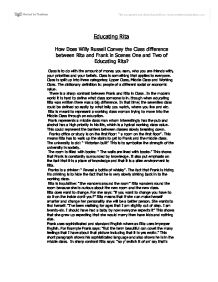 How Does Willy Russell Convey the Class difference between Rita and Frank in Scenes One and Two of Educating Rita?

Educating Rita How Does Willy Russell Convey the Class difference between Rita and Frank in Scenes One and Two of Educating Rita? Class is to do with the amount of money you earn, who you are friends with, your priorities and your beliefs. Class is something that applies to everyone. Class is split up into three categories; Upper Class, Middle Class and Working Class. The dictionary definition is: people of a different social or economic value. There is a sharp contrast between Frank and Rita in Class. In the modern world it is hard to define what class someone is in. though when educating Rita was written there was a big difference. In that time; the seventies class could be defined so easily by what telly you watch, where you live and etc. ...read more.

Franks is a drinker: " Reveal a bottle of whisky". The fact that Frank is hiding his drinking is to hide the fact that he is very slowly sinking back in to the working class. Rita is inquisitive: "She wanders around the room" Rita wanders round the room because she is curious about the new room and the new class. Rita does want to change. For she says: "if you want to change you have to do it on the inside don't you?" Rita means that if she can make herself smarter and change her personality she will be a better person. She wants to find herself. "I've been realising for ages that I am slightly out of step. I am twenty-six. I should have had a baby by now everyone expects it" This shows that she grew up expecting that she would marry then have kids and nothing else. ...read more.

This shows that Rita is in the working class and Frank in the Middle Class. Frank does not know about Charlies Angels. "she used to be with Charlies Angels FRANK Remains Blank" Frank hasn't heard of Charlies Angels I think it is because he didn't want to see women becoming independent. Also when Rita refers to Frank as a "Flora Man." Frank doesn't know what Rita is talking about. This shows that Frank is in the Middle Class because as Rita says Flora was for "people like you who eat pebble dashed bread." This is obviously showing the class difference between Frank and Rita. All throughout Educating Rita the sharp contrast between Frank's class and Rita's Class is blatantly shown through language, actions and the way the speak. Willy Russell not only shows the differences in the classes but he shows he has a full understanding of the classes in the seventies. By Sarah Doyle ...read more.