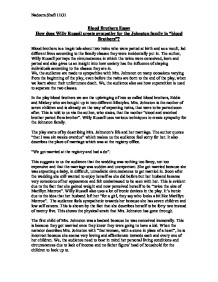 How does Willy Russell create sympathy for the Johnston family in &quot;Blood Brothers&quot;?

Blood Brothers Essay How does Willy Russell create sympathy for the Johnston family in "blood Brothers"? Blood brothers is a tragic tale about two twins who were parted at birth and as a result, led different lives according to the family classes they were incidentally put in. The author, Willy Russell portrays the circumstances in which the twins were conceived, born and parted and also gives us an insight into how society has the influence of shaping individuals according to the classes they are in. We, the audience are made to sympathize with Mrs. Johnston on many occasions varying from the beginning of the play, even before the twins are born to the end of the play, when we learn about their unfortunate death. We, the audience also see how superstition is used to separate the two classes. In the play blood brothers we see the upbringing of two so called blood brothers, Eddie and Mickey who are bought up in two different lifestyles. Mrs. Johnston is the mother of seven children and is already on the way of expecting twins, that were to be parted soon after. This is told to us via the author, who states, that the mother "stood and watched brother parted from brother". Willy Russell uses various techniques to create sympathy for the Johnston family. The play starts of by describing Mrs. Johnston's life and her marriage. The author quotes "that I was six weeks overdue" which makes us the audience feel sorry for her. ...read more.

Lyons could provide for him much better then she could. Mrs. Lyons breaks the promises with Mrs. Johnston which we made before receiving the child from her. Mrs. Lyons reminds Mrs. Johnston with the terrible deed that she committed by strongly stating the fact that "you sold your baby" and labels the whole act as a "crime". We, the audience sympathize with Mrs. Johnston because she has lost her job and is now unable to provide for her children. We the audience get to observe the truth and lies made by Mrs. Lyons, which is why our sympathies lie with Mrs. Johnston. The milkman shows how hard Mrs. Johnston's situation is when he states in act 1 scene 2 "well don't look at me love I might be the milkman but its nothing to do with me. No money, no milk!" This shows that the Johnston's do not have enough money to buy milk in which why the milkman states it has nothing to do with me. Kid one, "mam the baby's crying. He wants a bottle where's the milk?", The kids ask the mother a question one after the other but the mother keeps her hopes high by singing to comfort her children. When Mickey and Eddie are out playing and are stopped by the police woman the two are given different responses in different manners. The. Police woman creates double standards. She describes Mickey's behavior as a "serious crime" and warns Mrs. ...read more.

This actually proves to be true, as Eddie and Mickey both die right after they find out they are twins. The theme of superstition is also emphasized a great deal in the games of the children and the lyrics associated with them. For example, they talk about gypsies in the woods, crossing your fingers when you tell a lie, spitting. Society plays a major role in shaping the lives of individuals. Some people have nothing to blame but society for the many different types of hurtful experiences they have been through in their life and how other people are so quick to judge another individual as a result of their physical appearance, their clothes, their mannerisms or way of speaking. In my opinion, Willy Russell has successfully shown how two people "of one womb" can be shaped into two completely opposite individuals, all because of the overshadowing impact that society plays in an individual's life. This play has reflected on the idea how the lower classes are seen inferior to the middle class. We also need to take into account the language barrier between the two brothers because they have been brought up in two different back grounds and have been taught different principles. Eddie seems to behave in a more socially acceptable manner whilst Mickey is louder. We cannot blame the fate of the two brothers completely on superstition, neither can we say that it is completely due to the classes they were put in. in my opinion it is a mixture of both that leads to the tragic death of the brothers. ?? ?? ?? ?? Nadeem Shafi 11G1 ...read more.