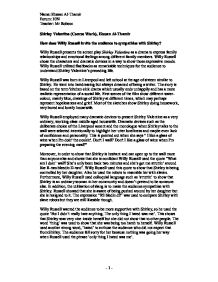 How does Willy Russell invite the audience to sympathise with Shirley?

Shirley Valentine (Course Work), Ehssan Al-Thamir How does Willy Russell invite the audience to sympathise with Shirley? Willy Russell presents the screen play Shirley Valentine as a drama to express family relationships and emotional feelings among different family members. Willy Russell chose the characters and dramatic devices in a way to show those expressive moods. Willy Russell utilized flashbacks as remarkable techniques for the audience to understand Shirley Valentine's preceding life. Willy Russell was born in Liverpool and left school at the age of sixteen similar to Shirley. He went into hairdressing but always dreamed of being a writer. The story is based on the term 'kitchen-sink drama which usually ends unhappily and has a more realistic representation of a social life. First scenes of the film show different water-colour, mainly blue, drawings of Shirley at different times, which may perhaps represent hopelessness and grief. Most of the sketches show Shirley doing housework, very bored and lonely housewife. ...read more.

Also he used the robots to resemble her with slaves. Furthermore, Willy Russell used colloquial language such as 'struttin' to show that Shirley is an ordinary woman in her community and doesn't pretend to be someone else. In addition, the utilization of slang is to make the audience sympathise with Shirley. Russell showed that she is aware of being pushed around by her daughter but she is resigned to it. The expression "R2 bledin d2" was used to compare Shirley with slave robots but they are still likeable though. Willy Russell wanted the audience to be more supportive with Shirley, so he used the quote 'But I didn't really hate anything. The only thing I hated was me'. This shows that Shirley was very nice inside herself but she did not show that to other people. The word 'thing' was used to show that she was being too harsh to herself. ...read more.

On the other hand, Jane expected an immediate 'yes' from Shirley because she knew that Shirley kept dreaming to travel. Alternatively, 'what bout Joe?' was employed to show that Shirley kept bringing Joe to the subject and she still loved him by always considering his opinions while Jane did not mention anything about Joe. To build more sympathy by the audience, Willy Russell wanted to express that Shirley knows the fact that Joe doesn't care about her but she is heart-broken and can do nothing, as in the quote 'He says he still loves me. You know. He doesn't. It's just somethin' he says. It's funny isn't it, I love you. Like it makes everythin' all right. Like you can be beaten and battered and half insane - and if you complain he'll say, 'What's wrong? You know I love you'. Additionally, to emphasise the same thought, Willy Russell used the quote 'I love you! They should bottle it and sell it. It cures everything'. ?? ?? ?? ?? Name: Ehssan Al-Thamir Forum: 10N Teacher: Mr Robson - 1 - ...read more.