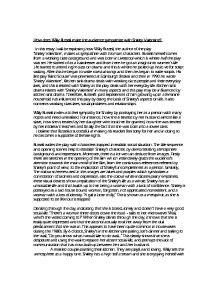 How does Willy Russell make the audience sympathise with Shirley Valentine?

How does Willy Russell make the audience sympathise with Shirley Valentine? In this essay I will be exploring how Willy Russell, the author of the play 'Shirley Valentine', makes us sympathise with his main characters. Russell himself comes from a working class background and was born in Liverpool which is where half the play was set. He started of as a hairdresser and from here he got an insight into women's life .He started to attend night class on drama and this is where he picked up his love for script writing. After this he began to write comical songs and then he began to write scripts. His first play 'Blind Scouse' was premiered at Edinburgh festival and then in 1990 he wrote 'Shirley Valentine'. Kitchen sink drama deals with working class people and their everyday lives, and this is related with Shirley as this play deals with her everyday life. Kitchen sink drama relates with 'Shirley Valentine' in many aspects and this play may be influenced by kitchen sink drama. Therefore, Russell's past experiences of him growing up in a feminine household has influenced this play by being the basis of Shirley's aspects on life. It also concerns working class lives, social problems and relationships. Willy Russell invite us to feel sympathy for Shirley by portraying her as a person with many hopes and need unrealised. ...read more.

Flashbacks are used to reveal events from her school days and early married life. It is through these techniques that we observe Shirley's world and transformation. The main titles at the start of the play show the audience the rough outlines of the play. The actual script starts of with fifteen or more drawings of Shirley Valentine doing a series of domestic activities. From here we realize how overlaid and domesticated Shirley's life is. At the start of the play Shirley is found expressing her thoughts to the wall. This establishes the exact feelings of loneliness "Hello wall" (shown by Shirley talking to the wall) and desperation of someone to talk to. Within the first few pages the audience see Shirley talking to the wall quite frequently so therefore we form the opinion that Shirley and Joe have a lack of communication. It has become a one sided relationship between them with Joe demanding what he wants. Shirley can still remember though vividly what their relationship used to on holiday with her. Shirley can not imagine going away on holiday on general principles and she can not see herself as being independent. She feels guilty how Joe would cope if she went away for two weeks, leaving all the cooking and cleaning for him to do! Jane eventually convinces Shirley to accompany her on the holiday. ...read more.

She analyses that Shirley is doing something wrong. She is used to her mother doing everything for her and has no regard for her needs. This emphasised how many of Shirley's needs are not met and in turn makes the audience sympathise with her. Marjorie is an old peer of Shirley from her school days. In Shirley's eyes Marjorie was very smart, favoured by teachers and had really good grades. She appeared to be very friendly and open minded even though she was of higher class. Shirley always wanted to be like her. When Shirley was at the school she was humiliated by the teacher who said; " Oh, Shirley, do put your hand down. You couldn't possibly know the answer ". She felt as if it was an attack on her lower class. She thought that those of higher classes have better start and chances in live. However after many years when she meets her again she realises that she became prostitute. In the 80s the social roles were becoming less fixed. Shirley was still under impression that your class decides who you are. That is why the revelation of Marjorie shocked her. For example " I just can't believe it. You. A Hooker. Honest, Marjorie? " It changes her way of thinking. It makes her aware that anything is possible. The audience can see that there is hope for her, but at the same time cannot help but feel sorry for her for all those years she has lost. ...read more.