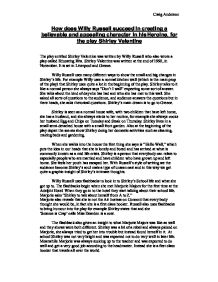 How does Willy Russell succeed in creating a believable and appealing character in his Heroine, for the play Shirley Valentine

How does Willy Russell succeed in creating a believable and appealing character in his Heroine, for the play Shirley Valentine The play entitled Shirley Valentine was written by Willy Russell who also wrote a play called Educating Rita. Shirley Valentine was written at the end of 1990, in November. It is set in Liverpool and Greece. Willy Russell uses many different ways to show the small and big changes in Shirley's life. For example Willy uses a normal kitchen wall (which is the main prop of the play) that Shirley uses quite a lot in the beginning of the play. Shirley talks to it like a normal person she always says "Don't I wall" expecting some sort of answer. She talks about the kind of day she has had and who she has met to this wall. She asked all sorts of questions to the audience, and audience answers the questions but in there heads, she asks rhetorical questions. Shirley's main dream is to go to Greece. ...read more.

The flashback also gives an insight to what Marjorie Majors was like as well and they shows were both different. Shirley was a bit of a rebel and always picked on Marjorie, she always tried to get her into trouble but instead found herself in it. At school Shirley was not very bright and was expected not to do very well in later life. Meanwhile Marjorie was always sucking up to the teacher and was expected to do well and get a very good job according to the headmaster. Instead she is a first class hooker that travels all over the world. There are not many similarities between Shirley and Marjorie, the only thing they have in common is they went to the same school. Marjorie is seen as a very rich person with a posh accent. She wears very rich clothes and has a limousine. Shirley on the other hand is seen a normal every day person with a Liverpool accent She wears normal high street clothes. ...read more.

Shirley is put into many different situations and has played them like a normal person would. She changes her voice tone to mix in with the kind of situation she is put in. The actress has done a great job making the part of Shirley Valentine as believable and realistic as possible. Russell has used all the resources of the actress as well as his own resources as a director. The reason for my decision is because of the way the play has the audience participating as the unseen cast. The dialogue is in the first person, she is speaking directly to us as if she is expecting us to reply or answer. The way she acts around different people, the way she dresses, and her cooking routine, they are all so normal and could easily be seen in any house in a working class family. This would undoubtedly have been a universal dream of many women in this time and Willy Russell took this and captured it in his play and subsequently it was depicted in the film of the same name. Craig Anderson ...read more.