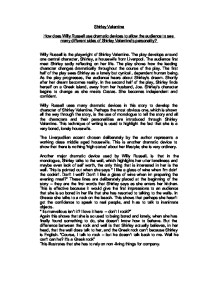 Shirley Valentine How does Willy Russell use dramatic devices to allow the audience to see many different sides of Shirley Valentine's personality? Willy Russell is the playwright of Shirley Valentine. The play develops around one central character, Shirley, a housewife from Liverpool. The audience first meet Shirley sadly reflecting on her life. The play shows how the leading character changes dramatically throughout the course of the play. The first half of the play sees Shirley as a lonely but cynical, dependent human being. As the play progresses, the audience hears about Shirley's dream. Shortly after her dream becomes reality. In the second half of the play, Shirley finds herself on a Greek island, away from her husband, Joe. Shirley's character begins to change as she meets Costas. She becomes independent and confident. Willy Russell uses many dramatic devices in this story to develop the character of Shirley Valentine. Perhaps the most obvious one, which is shown all the way through the story, is the use of monologue to tell the story and all the characters and their personalities are introduced through Shirley Valentine. This technique of writing is used to highlight the fact that she is a very bored, lonely housewife. ...read more.

An example of this is shown when Shirley speaks her mind in the film when saying the voiceovers, or when she is speaking to the camera without the other character present knowing what she is saying or thinking. An example of this 'speaking her mind' is pointed out when she is talking to Gillian. VO "I'm not saying she a bragger-but if you've been to paradise, she's got a season ticket. She's that type Gillian. You know, if you've got a headache, she's got a brain tumour" This technique is used by Willy Russell to illustrate that Shirley knows everybody in the story intimately. Knowing Gillian's personality so well highlights that she has known, and lived opposite her for many years i.e. she has been in the same routine for many years and has been bored and lonely for many years. Willy Russell portrays Shirley Valentine as a victim of the world with no self-respect or confidence. This is illustrated when she says "I always said I'd leave him when the kids grew up, but now they have, I'm scared there's nowhere to go". This is used to show that Shirley's self confidence has slowly diminished over the time that she has been in this unhappy and unfulfilling relationship with Joe. ...read more.

" Hey mate. What's this?" " Et ees calamares, sir, eet's type of fish" " Ye but what im askin' yer is what is this?" Willy Russell adds humour to the scene, through stereotypical characters. Dougie and Jeanette are stereotype English holidaymakers, adding humour by embarrassing themselves, along with the whole of England. There are also many other examples of humour. Perhaps more subtle, is the two extremes of contrasts in the location. The first scene is set in a dark, lonely and quiet kitchen in Liverpool, where she is all on her own. The first scene in Greece, shows her lying in the sun, on a beach, with lots of people around her, and it is a happy atmosphere with the sun shining on her. Willy Russell decided to name the story Shirley Valentine this being her maiden name, instead of Shirley Bradshaw for a reason. This is because Joe has a very old-fashioned view of women. He thinks that they should stay in the kitchen and look after the men. Shirley is Joe's slave. If he doesn't want to do something then they don't do it. He believes that he should make all the decisions and actually drives the old Shirley Valentine away. Effectively he has made her Shirley Bradshaw. The name of the story is Shirley Valentine because Shirley discovers the old fun, and enthusiastic Shirley that she was before the marriage changed her. ...read more.