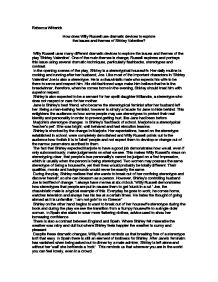 How does Willy Russell use dramatic devices to explore the issues and themes of Shirley Valentine?

Rebecca Witterick How does Willy Russell use dramatic devices to explore the issues and themes of Shirley Valentine? Willy Russell uses many different dramatic devices to explore the issues and themes of the play 'Shirley Valentine'. One of the main themes is change, Russell explores and portrays this issue using several dramatic techniques, particularly flashbacks, stereotypes and contrast. In the opening scenes of the play, Shirley is a stereotypical housewife. Her daily routine is cooking and running after her husband, Joe. Like most of the important characters in 'Shirley Valentine' Joe is also a stereotype. He is a chauvinistic male who expects his wife to be there to serve and respect him. His old-fashioned ways make him believe that he is the breadwinner, therefore, when he comes home in the evening, Shirley should treat him with superior respect. Shirley is also expected to be a servant for her spoilt daughter Millandra, a stereotype who does not respect or care for her mother. Jane is Shirley's best friend, who became the stereotypical feminist after her husband left her. Being a man-loathing feminist, however is simply a facade for Jane to hide behind. This enlightens the audience on how some people may use stereotypes to protect their real identity and personality in order to prevent getting hurt, like Jane had been before. ...read more.

Despite these dramatic changes, Willy Russell reminds us that breaking free of a stereotype isn't that easy. In Spain there is still an element of lonliness for Shirley. After Jane's feminsim has vanished when being asked out to dinner by a male admirer, Shirley is left alone and without her 'wall' she befriends a 'rock'. This reminds us that wherever you are in the world you can feel lonely, even in a crowd. The audience gets a deeper understanding of Shirley from monologues, which reveal her inner-most thoughts and views, completely honest and untarnished. In some of her monologues she talks about her relationship with Joe, 'He used to love me because I was a nutcase. Now he just thinks I am a nutcase.' The fact that Shirley often talks to a wall is extremely sad because it shows how lonely this character is. I get the strong impression that Willy Russell doesn't like how some marriages work. Shirley and Joe's boring routine is emphasised by the little dialogue that the two characters have between them. There is a flashback of when the couple were happy and in love, decorating the kitchen to show the contrast of the present situation with the fresh marriage at the start. Another brilliant use of flashbacks is to show Shirley's school life. ...read more.

Another kind of comedy, used throughout 'Shirley Valentine' is situation comedy. When Shirley unsuspectedly bumps into Gillian in a department store, holding a pair of lace pants, it is seemingly an embarrasing circumstance, but again Shirley's quick wit prevails. Casually telling Gillian about her lover, 'I shall be wearing them for...for my lover,' causes Gillian for once to be speechless in admiration for Shirley. When Gillian later gives Shirley an expensive robe, it is clear that Gillian's 'perfect' and superior lifestyle is simply a facade and that Gillian secretly desires a freer lifestyle, similar to how Shirley had been feeling. Although these two women are 'labelled' with two different stereotypes, they both want to break free and are experiencing a similar emotion in feeling restrained by their stereotypes. Willy Russell proves that stereotypes really can't define a personality or any emotion a person may feel. The audience benefits from the many different dramatic devices used in 'Shirley Valentine' to emphasise his views and the themes in the play, including lonliness and change. The humourous way that Willy Russell portrays the issues and his opinions of society is effective because it makes the audience reflect on society, yet it is still entertaining. From the play's issues, I re-considered how I myself, among others stereotype people I don't know. I personally found 'Shirley Valentine' entertaining and also thought-provoking. ...read more.