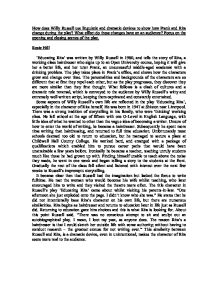 How does Willy Russell use linguistic and dramatic devices to show how Frank and Rita change during the play? What effect do these changes have on an audience? Focus on the opening and closing scenes of the play.

How does Willy Russell use linguistic and dramatic devices to show how Frank and Rita change during the play? What effect do these changes have on an audience? Focus on the opening and closing scenes of the play. Rosie Hill 'Educating Rita' was written by Willy Russell in 1980, and tells the story of Rita, a working class hairdresser who signs up to an Open University course, hoping it will give her a better life, and her tutor Frank, an unsuccessful middle-aged academic with a drinking problem. The play takes place in Frank's office, and shows how the characters grow and change over time. The personalities and backgrounds of the characters are so different that at first they repel each other, but as the play progresses, they discover they are more similar than they first thought. What follows is a clash of cultures and a dramatic role reversal, which is conveyed to the audience by Willy Russell's witty and extremely well written script, keeping them captivated and constantly entertained. Some aspects of Willy Russell's own life are reflected in the play 'Educating Rita', especially in the character of Rita herself. He was born in 1947 at Shiston near Liverpool. There was a strong tradition of storytelling in his family, who were 'thinking' working class. He left school at the age of fifteen with one O-Level in English Language, with little idea of what he wanted to other than the vague idea of becoming a writer. Unsure of how to enter the world of writing, he became a hairdresser. ...read more.

Stereotyping is a huge part of the play, especially between the classes. Frank has stereotyped Rita as "some silly women" on the basis that she is working class. Rita is also stereotypical; she stereotypes people of her own class as uneducated. "See the educated classes know its only words." The effect of stereotyping on the audience is that the stereotypes help the audience relate each character to their class, so the differences between them are more noticeable. This makes the play easier to understand than if the characters themselves were less stereotypical of their own class. Frank says, "What do you mean am I determined to go the pub? I don't need determination to get me into a pub." This shows that he relies on drink and doesn't need to be determined to go the pub, that he just goes almost without thinking about it. He also says, "Yes, well - erm - leave it in the oven ... Look if you're trying to induce some feeling of guilt in me over the prospect of burnt dinner then ..." This shows us that Frank has an old fashioned view of women, that they should stay in the kitchen and cook the meals. He then says, "Yes, that's it, you just pop off and put your head in the oven". This shows that he is sarcastic. When Rita first arrives Frank is completely surprised by her. She comes in full of life and is constantly moving around the stage as the stage directions show; "Going to the chair by the ...read more.

"I hear very good things about Australia. Things are just beginning there." Rita is more like her old self now as she has taken up smoking again, "She lights a cigarette". This shows that she has gained an education but kept the insight that she had at the beginning. She has stayed her old self but gained the education that gives her choices. She says, "I might go to France. I might go to me mother's. I might even have a baby. I dunno. I'll make a decision. I'll choose. I dunno". During the final scene Frank gives Rita a dress, he says "for an educated women". This is symbolic as at the beginning of the play Rita says that only an educated woman could wear, and him giving her the dress, symbolises her becoming the educated woman she wanted to be. 'Educating Rita' is such a popular and important play as it exists on many levels, firstly as just an enjoyable play about a teacher and student. But more importantly as a journey of two complex characters and their relationship as they try and change themselves for the better. Willy Russell's witty and well written language helps to convey these characters to the audience, using a number of dramatic and linguistic devices. The initial clash of cultures is a shock, but Frank and Rita grow as characters, and we as the audience grow to love them. The main theme is contrast and this would not have been achieved without the literary talents of Russell. All of these points create a captivating and fascinating play still loved by all generations today. ...read more.