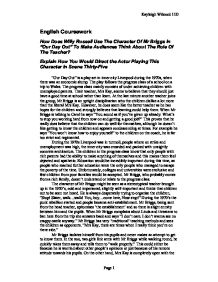 How Does Willy Russell Use The Character Of Mr Briggs In &quot;Our Day Out&quot; To Make Audiences Think About The Role Of The Teacher?

English Coursework How Does Willy Russell Use The Character Of Mr Briggs In "Our Day Out" To Make Audiences Think About The Role Of The Teacher? Explain How You Would Direct the Actor Playing This Character in Scene Thirty-Five "Our Day Out" is a play set in inner city Liverpool during the 1970s, when there was an economic slump. The play follows the progress class of a school on a trip to Wales. The progress class mainly consists of under-achieving children with unemployed parents. Their teacher, Mrs Kay, seems to believe that they should just have a good time at school rather than learn. At the last minute another teacher joins the group, Mr Briggs is an uptight disciplinarian who the children dislike a lot more than the liberal Mrs Kay. However, he does seem like the better teacher as he has hopes for the children and strongly believes that learning could help them. When Mr Briggs is talking to Carol he says "You sound as if you've given up already. What's to stop you working hard from now on and getting a good job?" This proves that he really does believe that the children can do well for themselves, although he doesn't like getting to know the children and appears condescending at times. For example he says "You won't know how to enjoy yourself" to the children on the coach, he is far too strict and regimental. ...read more.

Mr Briggs sees her attitude as negative and doesn't like her "woolly headed liberalism" meaning that she is to lenient with the pupils. Russell uses this to show the flaws in the way Mrs Kay teaches as Mr Briggs is clearly in the right. The contrast between Mr Briggs and Mrs Kay is due to their teaching philosophies, Mr Briggs thinking that the children should be quiet and learn, Mrs Kay sees that the odds are against the children and tries to give them a good time. If I was directing the play then I would show this in their appearance, Mr Briggs would be tall, thin and stern-looking, while Mrs Kay would be short and fat, with a kind face, this would emphasise the contrast between the characters. Mr Briggs is infuriated by Mrs Kay's approach to teaching and how she lets the children behave, "It's a shambles, the whole ill-organised affair." She does however get to know the children and tries to help them enjoy themselves. Mr Briggs sees her as a "Mother hen rather than a teacher" before they start the trip. By the time they're on the coach he is calling her "the great champion of the non-academics" meaning that all of the children adore Mrs Kay because she lets them roam wild. Mr Briggs still strongly believes that the children in the progress class have a chance in life, and appreciates the beauty in things. ...read more.

Carol, please come away from there." I think that he should say the first Carol sharply, as though about to shout, then stop himself short, realise the pointlessness of it and try pleading instead. When Mr Briggs say the line "what...makes you think that? Eh?" After Carol says that he hates kids I would make the actor playing him look stunned at that thought and see another point of view, his voice should be low and slightly guilty sounding. The line should make you pity Mr Briggs slightly as the thought that he hates them has obviously never entered his mind. When he realises that Carol is safe and reassures her that nothing will happen he should sound almost fatherly and loving. When he wraps his arms around her at the end he should look grateful that she was out of harm's way and very concerned. Willy Russell uses the contrasting characters of Mr Briggs and Mrs Kay effectively to make people realise that teaching should be a compromise between getting to know your pupils and seeing what's best for them and using discipline and work to help their futures. Mr Briggs is the anti-hero of the play, at first we all hate him and Mrs Kay is the pleasant, caring teacher. But, in the end, Mr Briggs' supercilious attitude hides an almost fun teacher who, above all, wants to give his pupils a future. ?? ?? ?? ?? Kayleigh Wilcock 11D Page 1 ...read more.